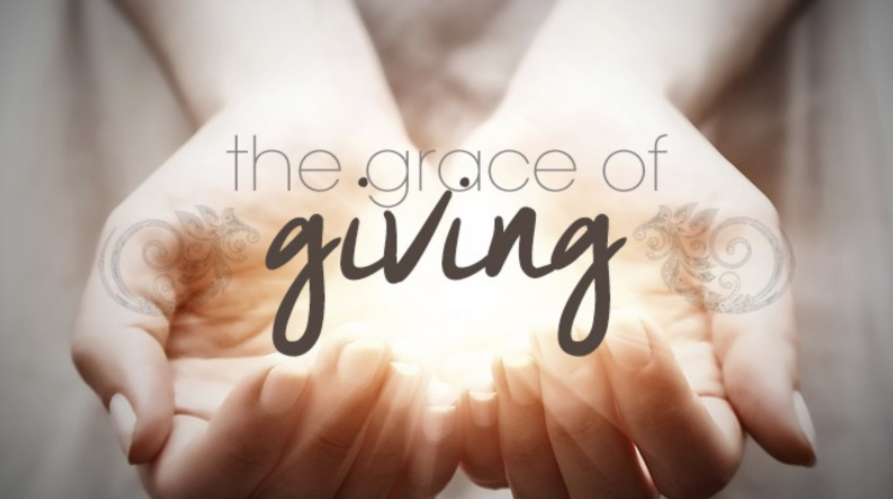 God is our refuge and strength, an ever-present help in trouble. Therefore, we will not fear, though the earth gives way, and the mountains fall into the heart of the sea. Though its waters roar and foam and the mountains quake with their surging. The Lord Almighty is with us; the God of Jacob is our fortress. Come and see what the Lord has done, the desolations he has brought on the earth. He says, “Be still, and know that I am God; I will be exalted among the nations, I will be exalted in the earth.”

And now, brothers and sisters, we want you to know about the grace that God has given the Macedonian churches. In the midst of a very severe trial, their overflowing joy and their extreme poverty welled up in rich generosity.  For I testify that they gave as much as they were able, and even beyond their ability. Entirely on their own, they urgently pleaded with us for the privilege of sharing in this service to the Lord’s people.  And they exceeded our expectations: They gave themselves first of all to the Lord, and then by the will of God also to us. So, we urged Titus, just as he had earlier made a beginning, to bring also to completion this act of grace on your part. But since you excel in everything—in faith, in speech, in knowledge, in complete earnestness and in the love we have kindled in you]—see that you also excel in this grace of giving. I am not commanding you, but I want to test the sincerity of your love by comparing it with the earnestness of others. For you know the grace of our Lord Jesus Christ, that though he was rich, yet for your sake he became poor, so that you through his poverty might become rich.

Everyday, when I when I pick up the mail at the end of our dirt road, we get magazines and catalogues. I subscribe to Christianity Today and The Christian Century – both magazines that speak quite relevantly to what it means to be a Christian today – especially in our society in 2020. Most of the time it is heavy reading, but it offers me new perspectives on the continuing dynamics of our faith. Many times, in my messages some of the new thoughts are integrated with the Scripture of the day. I also get Reader’s Digest – for a lighter read. However, catalogues overwhelm my mailbox. Take a look at just some of them —- always something is advertised that I just need to have. We are inundated with LL Bean, Land’s End, and a wide variety of other of brands. The catalogues usually end up in my recycle box and go to the Northern Landfill in Carroll County. How much stuff do I really need? Tough question to answer, because there always something that catches my eye and sometimes, I yield — I bet it happens to you also!

Perhaps more than any of us realize, we are deeply shaped every day to think of ourselves as consumers who need more and more in order to have enough and to be enough. We incessantly hear the message: “Your life is lacking. You are missing something you need. You will be fulfilled by the acquisition of more.” It is a disease that keeps us hoarding our stuff while ever searching for a greater and better fix.

In total contrast, the Gospel of Jesus shapes us to be not consumers but givers, not takers but contributors. In 2 Corinthians 8 and 9, Paul casts a vision of the Christian life as one of joyful, sacrificial generosity. He grounds this life of generosity in the Gospel itself: “For you know the grace of our Lord Jesus Christ, that though he was rich, yet for your sakes he became poor, so that you through his poverty might become rich” (8:9). When this Gospel really gets into our souls, it begins to change us. Specifically, it begins to shape us into people of radical generosity, thinking differently about what we give, how we give, when we give, and why we give. We’ll be exploring those themes for the next several weeks.

Let us take a look at today’s Scripture that is printed above and try to understand what Paul is saying in 2 Corinthians. Paul is into his ministry of visiting and supporting the many churches in Greece and Macedonia —- which is near Greece. Paul always writes the letters to help support the churches as they emerge in pagan countries. There is always growing pains and failures. There is competition between churches and conflict in the congregations — nothing has changed in thousands of years. Paul’s writing in 2 Corinthians is a lesson in politeness and skill. The Jerusalem church is dire straights — the finances have become very scarce and they need help. So, Paul is writing to the emerging churches in Corinth which is in south-central Greece. Paul is reflecting on the generosity of the Macedonian churches and subtlety suggesting that these churches could also help the church in Jerusalem. Even though the Macedonian churches were poor, they were able to give out of their poverty to support the other more needy churches. It was through the love of Christ that the churches were able to respond to the need. It was an example of gracious giving.

Gary Waddingham, rector of St. Luke’s Episcopal Church in Billings, Montana, tells this story: Several years ago, when I was ministering in a small rural community, we had extra food left over from our Christmas basket. I happened to think of a poor family who lived at the edge of town. I packed up the food and drove to their house. I am never sure how one goes about “doing charity” while preserving the dignity of those who receive the charity. When the woman, surrounded by her several children, answered the door, I thought of a subtle way to offer the food to her. I asked, “Do you know anyone who could use some extra food?” “You bet,” she said and got her coat, headed toward her car saying, “Follow me.” She took me to people who were poorer than she, people who desperately needed food. Even though she herself needed food, I remember clearly that there was absolutely no hesitation on her part. For some people, giving is second nature—just like the early churches.

Today we are struggling with an ongoing virus and have been struggling with it for many years. Not the Covid-19 virus – but Affluenza. Affluenza is a spiritual disease that is ravaging the modern world. It is similar to every other disease in that we can accurately diagnose it by its telltale symptoms. Ironically, the most common symptom of affluenza is discontentment. Many of us have discovered that as our wealth and our possessions multiply, so too does our discontentment. There is an inverse relationship between how much we have and how much we are convinced we need to be content. Just think about Adam and Eve. They had the whole world before them. The whole world, that is, but for one little tree that God had decreed would be off limits. And somehow, they determined that they could not possibly be content unless they had the fruit from that tree. And like Adam and Eve, we can have great abundance and still feel empty. We can have great abundance while still feeling the gnawing discontent that we do not have more. Just one more dollar, just one more gadget, just one more vacation, just one more upgrade on my cellphone—joy is always that close, but that far away. If you suffer from affluenza, you will know it when you look at all you have and still believe that just a little bit more will really bring the joy you crave.

Allow me to point you to one more symptom of affluenza: ingratitude. The Bible makes it clear that all the good we enjoy is a gift from God (James 1:17). The Bible makes it equally clear that we are to return thanks to God, gratefully and specifically, for each one of those good gifts. But ingratitude is a grave challenge to the person suffering from affluenza. Why should I give thanks to God when I am the one who has worked so hard for what I have? Why should I give thanks to God if what I have is only the smallest portion of what I want or deserve? Our lack of gratitude may prove that we have a bad case of affluenza.

To one degree or another, we all suffer from affluenza. We are all shaped by the incredible wealth and influence we enjoy. But our case is not hopeless. The power of God to heal us is far greater than the power of affluenza to destroy us. Affluenza is not addressed through poverty or frugality, but through generosity. To whom much is given, much will be required. To the affluenza-stricken Westerner of the twenty-first century, Paul might say, “Let the affluenza sufferer no longer squander his affluence, but rather let him use it generously to do good to others and to glorify God.”

Generosity is not always a matter of money. We can mentor a younger person as they seek to understand the hope that this world has for the future generations.  Our friends can help by offering generosity by making sure no one is left out socially, standing up for those who suffer misuse, offering true friendship, sharing praise, apologizing for offenses.

Generosity – the mark of a dedicated Christian!

Prayer of St. Ignatius’s — Lord, teach me to be generous, to serve you as you deserve,

to give and not to count the cost, to fight and not to heed the wounds, to toil and not to seek for rest, to labor and not to look for any reward, save that of knowing that I do your holy will. Amen