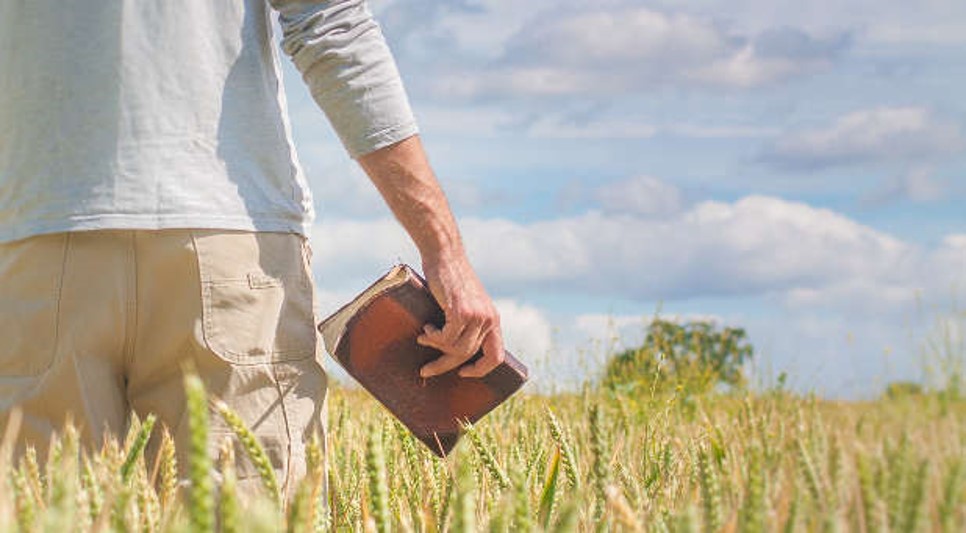 How lovely is your dwelling place, O Lord of hosts! My soul longs, indeed, it faints for the courts of the Lord, My heart and my flesh sing for joy to the living God. Happy are those whose strength is in you, in whose heart are the highways to Zion. For a day in your courts is better than a thousand elsewhere. O Lord of hosts blessed is the one who trusts in you!  -From Psalm 84

24 Jesus told them another parable: “The kingdom of heaven is like a man who sowed good seed in his field. 25 But while everyone was sleeping, his enemy came and sowed weeds among the wheat, and went away. 26 When the wheat sprouted and formed heads, then the weeds also appeared. 27 “The owner’s servants came to him and said, ‘Sir, didn’t you sow good seed in your field? Where then did the weeds come from?’ 28 “‘An enemy did this,’ he replied. “The servants asked him, ‘Do you want us to go and pull them up?’ 29 “‘No,’ he answered, ‘because while you are pulling the weeds, you may uproot the wheat with them. 30 Let both grow together until the harvest. At that time, I will tell the harvesters: First collect the weeds and tie them in bundles to be burned; then gather the wheat and bring it into my barn.’”

Advent and Christmas is about waiting. We look back on the ancient people of God who waited for the promised Messiah, and we look forward with all the saints to the day when the King will return to renew all things. The book of Matthew is the introduction to the whole New Testament and one of the earliest introductions to Jesus. Matthew’s portrait of Jesus is that he is long-awaited Messiah, who brings the Kingdom of God to earth and is the fulfillment of God’s ancient promises. In this series, we are focusing on the theme of “waiting” for the Messiah King. In the first 3 Sundays of Advent, we’ll focus on “waiting stories” that Jesus tells in the book Matthew, most of which focus on waiting for the second coming of the King, when he comes to fully inaugurate the Kingdom of God. On Dec 20, we’ll shift to the first coming of the King, how the ancient people waited for him and how we are still waiting for him today.

Waiting is difficult for everyone of us. Especially during the difficult times of the pandemic, we wait to see if the grocery store shelves are filled with toilet paper or paper towels or 409 cleaners. Stuff that is in short supply. Recently I found my mother’s WWII ration card — my parents had to wait for sugar or gas or even coal to heat their home. Now we grow tired of waiting in line and we shop on the internet because it is quicker and easier.

But waiting during Advent – is the anticipation of the coming of the Messiah. It is not about Christmas gifts or trips or Christmas parties— It is waiting and longing. Today’s Scripture in Matthew addresses an audience that is knowledgeable about farming and what it takes to raise good crops. It is about the wheat and weeds and waiting for the harvest to come.

This story comes right after the parable of the sower who sows seeds on rocky ground and good ground. It is about how we react to the word of God – are we receptive to Jesus’ message to us or do we, in fact, reject it? Are we the fertile ground for the small mustard seed of faith to grow in us?

The farmer has planted good wheat seed into fertile ground and is now waiting for the harvest. But while he was waiting the “enemy” came and sowed weed seeds and they were mixed in the field. His servants wanted to go out and cut the weeds out, but the farmer said that it may uproot the good crops and cause a poor yield. Wait until it is harvesttime until you separate the wheat from the weeds and then put the bundles of wheat into the barn and burn the weeds. Jesus talks in parables — stories that are understandable but have deeper meaning.

For those of us who are gardeners, we have trouble understanding this parable. Are not weeds just weeds and wheat just wheat? We should be able to understand that. However, what is missing is the understanding of the word “weeds.” In the King James version of the Bible, this parable is also called the parable of the wheat and tares. When we Google tares we find that it is a Middle Eastern weed that looks very much like wheat. Once the wheat goes to tassel and seed you can tell the difference between the wheat and the tares. Mature tares and wheat are different, but immature wheat and tares look similar.

This parable is an “end times” parable. Jesus is talking about the Kingdom of God in the end times. In the first century, there was a yearning for the Roman occupation to end. Israel had waited and watched for decades for a Messiah to come and liberate the people from the iron boots of the Roman Legions. They wanted the kingdom of David to be installed by the zealots overthrowing the Romans.  Jesus is speaking about a new Kingdom of God that was coming but not yet! Jesus in Matthew is saying I am the emerging King- -God incarnate.

By the time we get to the 13th chapter of Matthew, the reader knows that Jesus is who he says he is — he is the One who the Jews have been waiting for — the expectation of the Messiah. There have been numerous signs and wonders — miracle healing, changing water into wine, fulfillment of prophecies. The Jews were beginning to know that Jesus is the One who he says he is.

But what do wheat and tares mean in this story. First — the enemy is Satan — and has sown the tares of evil in midst of society (wheat). It is hard to distinguish who is evil and who is following the Spirit of God in their lives. Jesus was always concerned about who was the hypocrite and who was sincere and honest in their faith. Weeds are the hypocrites who claim to follow Jesus when it is convenient and expeditious to behave so that people will be believe them. The movement of the Kingdom of God moves slowly in the field — has begun already with the arrival of Jesus but not finished. When the resurrected Jesus comes the second time —- the weeds will be separated from the wheat and burned, and the wheat placed in the barn (heaven).

We are living in the in-between time. The enemy continues to sow seeds — wars, pestilence, poverty, racism, separation of people from loved ones. The list is endless. Meanwhile the faithful continue to preserve. We are unwilling to succumb to the ravages of the endless evil that is around us. There is hope – plenty of hope as shown by the followers of Christ.  People who strive to live a godly life – who want to help people who need help. Christians who seek to love neighbor and to be generous with their love and compassion. Oh, yes, it is quite hard to be wheat in the fields when we are surrounded by some much of the tares. But Jesus is coming! Hope is coming!

C S Lewis writes in the Lion, Witch and Wardrobe – in the Narnia Tales –Always winter, but never Christmas. These are the words that Lewis uses to describe the reign and spell of an evil winter witch. The beautiful white season becomes suffocating for the world of Narnia, as it is terrorized with an eternal winter and with no end in sight. no end means no new beginnings. no new dreams, no new chapters, no new gifts, no celebrations, no victories. So, therefore never Christmas. Lewis writes that there will be a time when Wrong will be right, When Aslan[1] comes in sight, at the sound of his roar, sorrows will be no more, when he bares his teeth, winter meets its death, and when he shakes his mane, we will have spring again.

[1] In The Narnia Tales, Aslan is the Lion and represents Jesus.