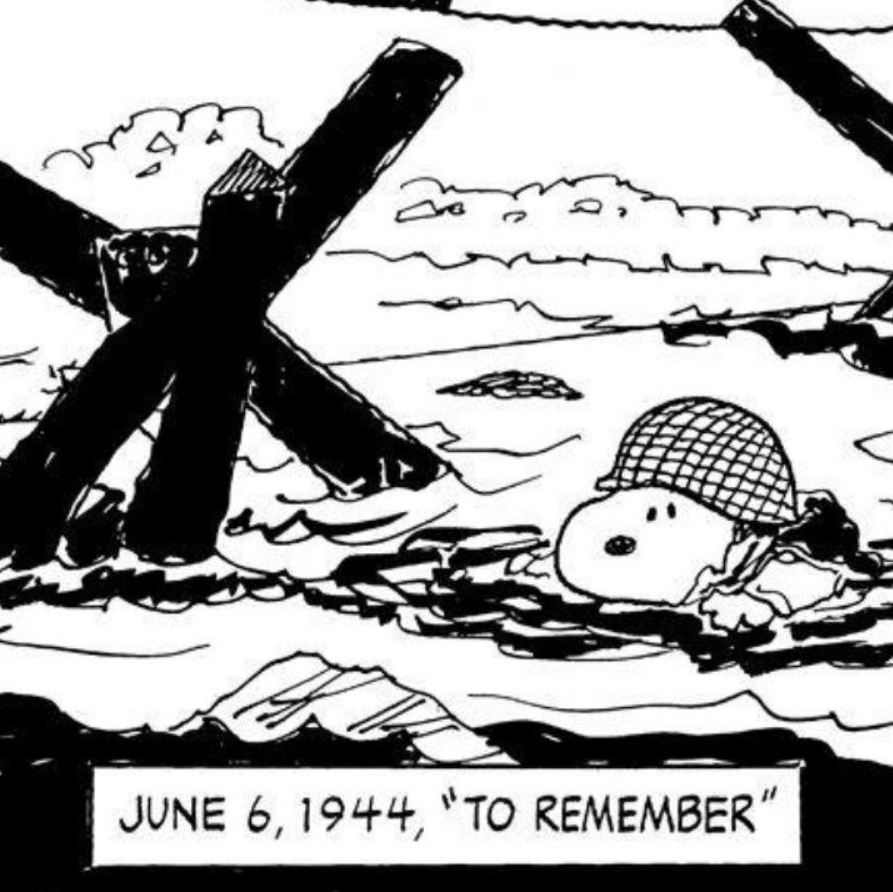 Esther 14: 12-14  12 When they told Mordecai Esther’s words, 13 he had them respond to Esther: “Don’t think for one minute that, unlike all the other Jews, you’ll come out of this alive simply because you are in the palace. 14 In fact, if you don’t speak up at this very important time, relief and rescue will appear for the Jews from another place, but you and your family will die. But who knows? Maybe it was for a moment like this that you came to be part of the royal family.”

As I write this twelfth Reflection on Saturday June 6, 2020, I was reminded again, in an extraordinarily strong way, that today is D-day. In the local papers, there is the very poignant   cartoon of Peanuts — the dog Snoopy, with a helmet on — slowly moving toward the beach to land in Normandy. So many years ago, our nation was united in a common cause to defeat the forces of evil that had pervaded the world. All of us struggled with the deaths of many friends and family, the persistent effect of rationing and the shared suffering for a common cause of freedom.

Also, today, we as Americans and Christians, are struggling and deeply concerned about our future. In the period of about six months, we have witnessed an impeachment, then the Coronavirus onslaught that has ravaged our bodies and killed over 100,000 Americans. During the “stay at home” restrictions, our spirits have become tested in the reality of the economic impact that has left 40 million Americans unemployed and filling for unemployment. Now, the very ugly head of the racism virus has come forth again in the killings of Breonna Tayler, Ahmaud Arbery and George Floyd. Overnight, our country has been ravaged by protests against racism with many opportunists committing criminal acts of arson and robbery. In the past, many of these significant history changing events have taken place in decades instead of months.

Given everything that is going on, we feel disoriented and many of us wonder if we have lost our moral compass about who we are as Christians and Americans. It is right to feel angry in the treatment of our brothers and sisters and fellow citizens. We should believe that, as humans, all of us are made in the image of God and are intitled to be treated with dignity and respect. But, that is not the case! Chaos, conflict, carnage and confusion reign in our communities and in our hearts. We know, in our hearts, that this is not the way life should be. But what should we do?

These past several weeks have been exceedingly difficult for our grandson, Joshua. Many of you know and have met Joshua. He is a very caring and sensitive person, who is amazingly physically and academically strong — but, like a lot of us can be damaged by hateful words. As a teenager, we know that teens can be very cruel towards others who are different than them. Joshua’s light brown skin comes from his dad’s Samoan lineage. His sensitive feelings come from his mother and father. How would you feel if someone asked you, what are you? what race are you? what ethnicity are you? These are not just questions said in an inquiring way – they are hateful and racist questions. No one has ever asked me what are you? because I am white, they know it. Our daughter, Amy and our son-in-law, Tai have been very loving and caring as Tai shares with Joshua, the racism pain that Tai has experienced in the thirty years as a Marine.  The pain does not go away and is rekindled by the ongoing racism issues. Joshua was asked what he should do about the taunts and hateful jeers towards him — show love to them, unconditionally!

Take a look at chapter 4 in the biblical book of Esther.[1] The entire Jewish community was in a perilous place. People feared for their lives. Leaders are in disagreement and disarray. Finally, one leader, Mordecai, tells another, Esther, this is not the time to quibble, be quiet, or quit. “Maybe it was for a moment like this that you came to be part of the royal family” (Esther 4:14 CEB). In the biblical story, Esther was going back and forth, not accomplishing anything. In a moment of crisis, we realize that we no longer have time for debates, for arguing over slogans, over whose lives matter, over perceived failures in media coverage. We can no longer spend time disputing the fact that racism is in us, and is killing black men, women and children. We don’t have time to spend critiquing the individual lives and motives of victims or police officers or public officials. In the words of Martin Luther King — “There comes a time when silence is betrayal”

Our prayer vigils and moments of silence have become shallow, easy alternatives to actually using our voices as God calls us to do. We can no longer merely host and organize prayer vigils for reconciling that which we have never experienced. We can’t keep preying on each other and then pray for forgiveness. We can’t pray for God to do what we are unwilling to do ourselves. The Bible shows us how to get through life, but it rarely if ever answers why. Be transparent. If you don’t know something for sure, say so. Don’t make things up. Don’t say things that sound good but have nothing behind them.

So, I suggest in the midst of conversations with your family and friends about what is happening now in our society, speak up. Share the good news of Jesus Christ, who reminded us that we are to “love our neighbor as our self.” Teenager, Joshua, has already put into practice the words of Jesus – can’t we do the same?