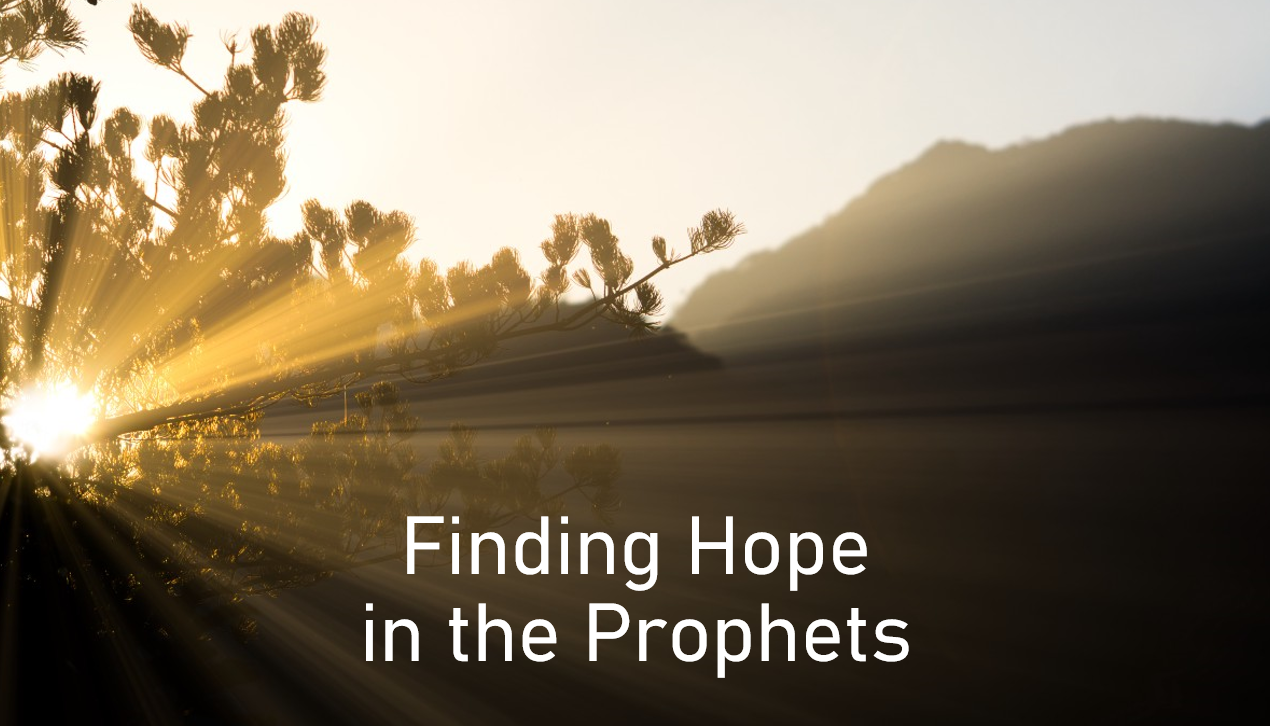 When we are lonely and feeling lost, Jesus calls us and brings us hope and peace. When we are angry and frustrated, Jesus heals our wounds and soothes our tempers. When we are sorrowful and broken, Jesus binds up our wounds with his healing love. Come, let us worship the one who cares so abundantly for us.

Finding Hope in the Prophets

Isaiah 40:31 but those who hope in the Lord will renew their strength. They will soar on wings like eagles; they will run and not grow weary; they will walk and not be faint.

Jeremiah 29:11 11 For I know the plans I have for you,” declares the Lord, “plans to prosper you and not to harm you, plans to give you hope and a future.

Zachariah 9:12 Return to your fortress, you prisoners of hope:  even now I announce that I will restore twice as much to you.

Last week we began a series on HOPE. I am certain that all of you would agree that we are living in unchartered times. The world as we knew it is changing and has changed so much that we doubt that we will ever go back to the “old ways.” Sometimes, in the middle of these moments of radical change in shifting, it can feel like everything is moving under our feet and it is hard to get our footing. Our anxiety goes through the roof and there is a sense of fear that can overwhelm us.

The hope we are talking about is not the simple hope – like wishful thinking hope – I hope that I may win the Powerball, or I hope it will not snow tomorrow. When I am talking about hope, we are talking about something much deeper than wishful thinking. Last week we came to grips with a better definition — Hope is the conviction that despite one’s presence circumstances, that the future will, in some meaningful sense, be better than the present. Also, Hope is choosing to believe and act as if the future will be better than the present.

Last week we used the Psalms looking for what they had to say about hope. We were reminded that the Hebrew people also experienced hard times, including pandemics. Their hard times led to questions like where is God in the midst of their troubles. Yes, the Hebrew people asked hard questions, too, but they invariably returned to the

hope that God would rescue them, setting them back on solid ground. Last week we asked the question, “What do we do when we are at the end of our rope?” We concluded that the answer was found in Psalm 41. “I put all my hope in the Lord.” These words are sometimes easier said than done. For some, it is not as simple as grabbing onto the end of the rope. Many can’t even find the rope. They seek God but seem unable to find him. Which leads me to wonder whether they are seeking God in the right places?

I am certain that we find God in the still small voice of a neighbor or a family member reaching out to us with God’s love. We are doing it through the caring phone calls members are making to each other; by delivering food and medicines to members who can’t pick them up for themselves; with the cards that people are sending; and through the meals and care items we give. We have helped twenty families with gifts of love in the desks that we made. These were gifted by the congregation. Next week we will bless blankets that the ladies of Loops of Love have made and are being donated to Sarah’s Hope, the women’s shelter in Reisterstown. These gifts are important. And they have one thing in common. They are gifts of hope. They are gifts of hope and love from God’s people who are demonstrating God’s hope and love in the world.

But let me get back to our theme for today. Today, we are going to look for hope in the Prophets. As we all know during the good times, when all seems right with the world,

the prophets predicted those hard times, they also preached and ministered to the

people, offering words of hope during the period of darkness.

Let me give you some background to help us understand the historical context to which today’s Scripture comes from. The books of Isaiah, Jeremiah and Zechariah were speaking to the Jews in Judah, which included Jerusalem.  Judah was a small strip of land in the middle of Israel right on the major ancient trade routes from the far east to Egypt and the lands on the Mediterranean. To put all of this into perspective today, Judah was 10% the size of Maryland or about the size of Carroll, Harford and Baltimore counties combined.

In 605 BC, Judah was surrounded by Middle Eastern superpowers of Egypt and Babylonian which were more than 100 times the physical size of Judah. Obviously, there would be ongoing wars for the dominance of the critical trade routes. Several times Jerusalem was sacked by the waring kingdoms. In 586 BC, the temple built by Solomon was destroyed and many of the citizens were taken into captivity back to Babylon. This is what  Israel’s prophets wrote about what seemed like the hopelessness of the exile.

Nearly everyone who listens deeply to this story realizes that they too have been in exile at some point in their lives. All of us have found ourselves in hopeless situations where we asked, why isn’t God helping now? We then read the words of hope that the Prophets brought to the people in exile and say, Those words of hope are not just for them. These words are for us, too. Certainly, many of us need a word of hope now. This pandemic with its 400,00 deaths, lockdown, and economic hardships is hard. It is hard! The good news is that we will transition out of this thing. It will not happen soon, but in time, there will be a vaccine, maybe even a cure. It will be months or years, but it will not take seventy years, like the exile did for the Jews in Babylon.

Jeremiah was speaking to the exiles in Babylon, reminding them that they were going to have to live in exile for a long time. Many of them would not return. It would be their children and their children’s children who reclaimed the land of Judah. So, Jeremiah told them to make the best of it, to settle in the land and bless those where they were living. However, he added, and this was a big however, that a day was coming when they would go home. Then comes this wonderful verse: For I know the plans I have for you, declares the Lord, plans to prosper you and not to harm you, plans to give you hope and a future. — Jeremiah 29:11. This is one of Ann and my precious verses. It has spoken to us many times in our trials.

Too often, we read this verse and think it means that God is about to save us right now,  but that is not what it says at all. This whole chapter Of Jeremiah reminds us that we may have to go through dark times for a while. For the Jews, it was seventy years.

Which brings us to the words of Isaiah: Do you not know? Have you not heard? The Lord is the everlasting God, the Creator of the ends of the earth. He will not grow tired or weary, and his understanding no one can fathom. He gives strength to the weary and

increases the power of the weak. Even youths grow tired and weary, and young men stumble and fall; but those who hope in the Lord will renew their strength. They will soar on wings like eagles; they will run and not grow weary; they will walk and not be faint. — Isaiah 40:28-31

Isaiah is telling us that those who hope and wait on the Lord will receive a lifeline from the Lord. These words from the prophet are a lifeline. When things get hard, when we find ourselves at the end of our rope, cling to these words. They do not promise that we will not have to go through hard times, but they do promise that if we cling to God, God will renew our strength. When we feel like fainting, God will walk with us. When we run, God will provide us strength. And in the end, God will raise us up on eagle’s wings and we will soar with God.

Which brings us back to where we began. The reminder that God does not leave us or forsake us, that God comes to us bringing hope. But God usually conveys that hope through people. God used the prophets to bring a word of hope to the people in exile. And God asks us, as his body to convey that hope to those around us too, both through our words and our actions.