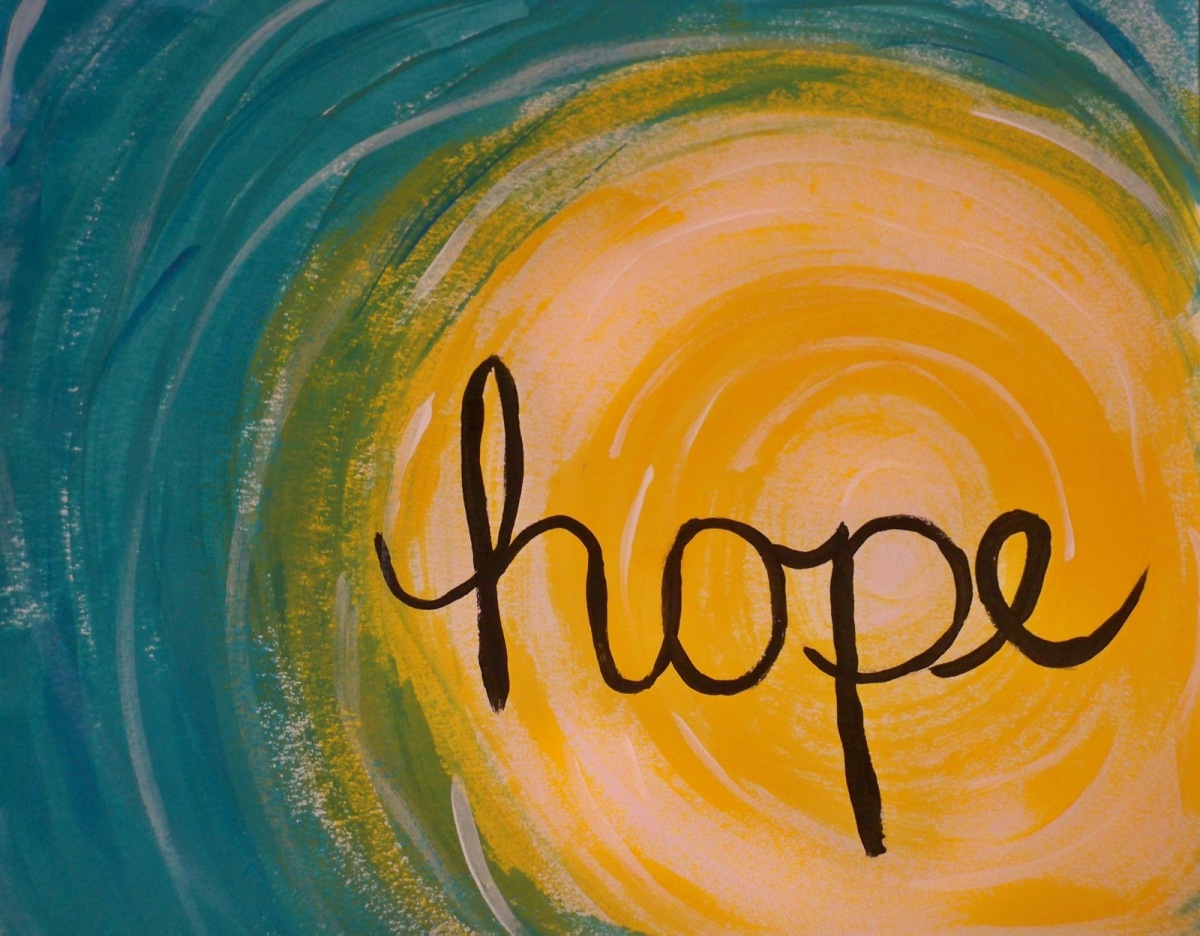 Isaiah 40: 27-31 27 Why do you complain, Jacob?  Why do you say, Israel, “My way is hidden from the LORD; my cause is disregarded by my God”? 28 Do you not know? Have you not heard? The Lord is the everlasting God, the Creator of the ends of the earth. He will not grow tired or weary, and his understanding no one can fathom. 29 He gives strength to the weary   and increases the power of the weak. 30 Even youths grow tired and weary, and young men stumble and fall; 31 but those who hope in the LORD will renew their strength. They will soar on wings like eagles; they will run and not grow weary; they will walk and not be faint.

Romans 8:22-25 22 We know that the whole creation has been groaning as in the pains of childbirth right up to the present time. 23 Not only so, but we ourselves, who have the first fruits of the Spirit, groan inwardly as we wait eagerly for our adoption to sonship, the redemption of our bodies. 24 For in this hope we were saved. But hope that is seen is no hope at all. Who hopes for what they already have? 25 But if we hope for what we do not yet have, we wait for it patiently.

Today is the second Sunday of Advent. Advent is a season of the liturgical year observed in most Christian denominations as a time of expectant waiting and preparation for the celebration of the coming of the Christ Child. Worship practices that we do  consist of associated with Advent include keeping lighting an Advent wreath, praying an Advent daily devotional, erecting a Chrismon tree.   The primary focus of Advent is waiting – expectant waiting—expectant waiting with hope.

Waiting — ever sit at a traffic signal waiting for it to change? How about you are in a doctor’s office waiting and waiting to be called. Waiting? Fidgety waiting? Are you good at waiting or do you keep staring at the clock or your cell phone? Waiting is hard to do – and waiting can be a learned discipline – especially if we are waiting for God to arrive or God to intercede or God just to be present. Isn’t it true, we will call upon God and then wait? But waiting can be active waiting also – we engage others while we are in the process of waiting.

Today, we are going to continue our sermon series on Wait Upon the Lord with Hope. I want to begin by reminding us of what I mean by hope. Hope, like Love is an action word — action means that we have an important part in making Love or Hope come alive. Hope is choosing to believe and act as if the future will be better than the present. But it is more than that. It also includes sharing our hope. Once we have hope, sharing it is not really all that hard, because hope is contagious. If we have hope, we cannot help but share that hope with those around us. Hope reflects our attitude towards our life.

If that is what hope is, then the opposite of hope would be despair. Despair can be defined as choosing to believe and act as if the future will be as bad as, if not worse than, the present. For example: That the pandemic will continue for a long time. Or I am going to die anyway, so why take the vaccination. (BTW, I have heard that comment this past week) Notice, that in both cases, the definition includes the word choosing. We often think of hope and despair as feelings, and they are. But they are feelings that arise from the thoughts that go through our minds. We can tell ourselves that the future is going to be better than the present or that it will be worse. If we convince ourselves, or allow others to convince us, that things will be worse, we will soon turn to despair. However, if we convince ourselves that it will be better, then we soon find hope.

It was the summer of 1820. Ten-year-old Phineas was about to see the island—his island!

The day he was born, his grandfather presented newborn Phineas with a deed—a deed to

some land in Connecticut called Ivy Island.[1] And for the first time, Phineas was going to

see and play on the island—his island! His parents were quick to remind Phineas—not

every boy is born a landowner. Neighbors feared that the young landowner wouldn’t want

to play with their children. When you own an island, you feel important.

When you own an island, you want to see it! Phineas had yet to see his. But now the day had come. On that summer day in 1820, after a long ride with a horse and buggy, Phineas jumped from the wagon and ran through a meadow. He raced to the row of trees and there he saw Ivy Island. When he saw the island, he stopped. His heart sank. Ivy Island was five acres of snake-infested marshland. His grandfather had called it the most valuable land in Connecticut. But it was worthless. His father told him it was a generous gift. But it wasn’t. It was a joke. It was all a cruel, heartless joke! Phineas stood there in disbelief and then uttered four words. Four of the most haunting words in the English language: “But I had hoped.” So much pain is packed into these four words. “But I had hoped.”

Imagine Isaiah’s anticipation when the word of the Lord came to him in 740 BC. Isaiah then wrote about all the nations streaming to Zion—beating their swords into plowshares and their spears into pruning hooks (Isaiah 2:2-4). Isaiah wrote about a virgin conceiving and bearing a son, whose name will be Immanuel, God with us (Isaiah 7:14). Isaiah gave this son other names, “Wonderful Counselor, Mighty God, Everlasting Father, Prince of Peace” (Isaiah 9:6). With such great and precious promises, everything was going to be great for Isaiah—smooth sailing! Right? Wrong! Dead wrong!

In Isaiah 29:13, the prophet says that God’s people honor him with their lips, but their hearts are far from him. In Isaiah 30:1, the prophet calls God’s people stubborn children who have plans, but they aren’t anywhere close to God’s plans. In Isaiah 31:1, the prophet says that Israelites rely on horses and trust in chariots but do not look to the Lord or consult the Holy One of Israel. After hearing about peace and Immanuel and a coming King, this is how people are living? Can you hear Isaiah’s heavy sigh? “But I had hoped.” The result? Shattered hope. Dashed hope. Futile hope. What are our options?

Become bitter. Do you know that Phineas—the Phineas of Ivy Island fame—this Phineas became bitter for the rest of his life? In fact, Phineas made a career out of being bitter. He made a life out of fooling people—just like he’d been fooled. You don’t know him as Phineas. You know him as P. T. —P. T. Barnum of the Barnum and Bailey Circus. P. T. Barnum coined the phrase, “There’s a sucker born every minute.”

When we lose hope, we disappear into sadness. We know—we just know—we’ll never be happy again. Life after loss doesn’t follow an ordered and predictable path. It looks a lot like a tangled plate of spaghetti—nothing has rhyme or reason. Four words consume us. “But I had hoped!” When life’s hammer crushes our heart, we can become bitter, we can become broken, or we can become believing.

After the American Civil War, the College of William and Mary in Williamsburg Virginia had to close its doors. Weeds grew on the campus. Roofs tumbled in. Windows were broken. It was all going to be a lost cause were it not for the efforts of one man—Benjamin Ewell. Ewell went to the bell tower every morning and rang the bells, calling students to class. Except there weren’t any students. And there weren’t any professors. For seven years—every day— Benjamin Ewell rang the bells at the College of William and Mary. Ewell refused to become bitter. Ewell refused to become broken. Ewell became believing. The result? The College of William and Mary reopened in 1888 and is today one of the foremost colleges on the East Coast.

This is Isaiah! Isaiah keeps ringing the bells! In spite of it all, the prophet pens these words, “Those who wait upon the Lord shall renew their strength; they shall soar on wings like eagles; they shall run and not grow weary; they shall walk and not grow faint” (Isaiah 40:31). The word wait in this verse is the same Hebrew word for “hope.” Do you see the connection? Biblical waiting means waiting with hope. Biblical hope means hoping while we wait. Waiting and hope. They go together—like peas and carrots, Laurel and Hardy, and Bert and Ernie. Conversely, we won’t wait if we don’t have hope. And hope won’t help unless we learn how to wait. Isaiah 40:31 contains some of the most powerful words in the Bible. The words in this verse combine waiting with hope to put a spring in our step and a song in our heart. But they are still just words. Letters forming ideas; figures on a page announcing concepts, viewpoints and thoughts.

That’s why Isaiah goes on to tell us about the Suffering Servant who took on flesh and blood in Bethlehem. The prophet says that the Servant will grow up and one day give his back to those who strike him and his cheeks to those who will pull out his beard. He will not hide his face from mocking and spitting (Isaiah 50:6). The Servant will be pierced for our transgressions and crushed for our iniquities (Isaiah 53:5). He will even be led like a lamb to the slaughter and like a sheep is silent before its shearers, he will not open his mouth (Isaiah 53:7). The Servant will give himself over to suffering and death and feel the Roman whip and sound of a hammer hitting the nails. Hope will listen and love; hear and heal. Hope will have a name—Jesus. Jesus!

What does Jesus do? Scold them? Berate them? Dismiss and demean them? No! Luke 24 goes on to tell us that Jesus makes himself known through the Scriptures and Holy Communion. That’s where Jesus delivers hope!

Recently, one-hundred and twenty-two men who had suffered a heart attack were evaluated based upon their hope. Of the twenty-five men with the least hope, twenty-one died within eight years. Of the twenty-five with the most hope, only six died after eight years.[2] Do the math. Loss of hope increased the odds of death by more than three hundred percent. Loss of hope predicted death more accurately than blood pressure, the amount of earlier heart damage, or cholesterol level. It’s better to eat Twinkies in hope than to eat broccoli in despair!

There’s a verse that puts all of this together. You know it. It’s Isaiah 40:31. “Those who wait upon the Lord shall renew their strength; they shall soar on wings like eagles; they shall run and not grow weary; they shall walk and not grow faint.” Amen.

[1] The P.T. Barnum of the Barnum and Bailey Circus – In the Beginning (electricscotland.com)