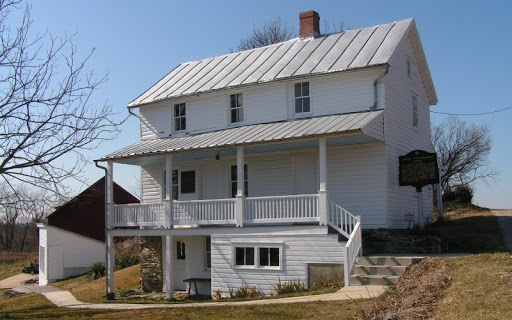 Hebrews 11:8 8 By faith Abraham, when called to go to a place he would later receive as his inheritance, obeyed and went, even though he did not know where he was going.

Today’s message is by Helen Kemp the curator of the Strawbridge Shrine in New Windsor, MD and the message below is from the Shrine’s website www.strawbridgeshrine.org.

Robert Strawbridge is credited with establishing the Methodist movement in America. Starting at his home in what was then Sam’s Creek, Maryland, Strawbridge held the first class meeting (about 1761) and organized the first enduring Methodist Societies – beginning in his own home, and then at other locations in Maryland, Pennsylvania, and Delaware. His preaching carried him throughout the colonies, and helped establish a movement that, following the Revolutionary War, would become a new denomination.

There are few records of Robert’s life but we owe a debt of gratitude to a number of diligent historians, chief among them Ruthella Mory Bibbins, whose research made it possible for us to recreate the life and mission of Robert Strawbridge. Bibbins suggests that he may have been about 28 years of age when he came to America about 1760.

After his conversion in Ireland, Strawbridge began to preach in his hometown of Drummersnave. And since itinerant preaching was in the nature of the new Methodist movement, he began to travel; first to the western coastal town of Sligo, some 30 miles northwest of his home. Later, in County Cavan, he was “recognized…as a man of more than ordinary usefulness and very ardent and evangelical in his spirit.”

In County Armagh Robert was employed in erecting some buildings but continued to preach. While preaching near Terryhugan, he met and married a devoted Wesleyan, Elizabeth Piper. Shortly afterwards they chose, as was a fairly common practice at the time, to leave Ireland and make their home in the New World. They settled in Frederick County (now Carroll County), Maryland, circa 1760, in a log house rented from a Quaker, John England (who by 1766 had become a Methodist). As soon as the family settled here, Strawbridge began to preach more than to farm. The success of his preaching is found in the creation of an ever-widening circuit of meetings and classes.

Strawbridge was independent by nature, a sincere preacher with firmly held convictions and a burning desire to share his faith. As remembered by Mrs. Rebecca Bennett, a daughter of the first recorded American Methodist convert John Evans, Strawbridge was “of medium size, dark complexion, black hair, had a very sweet voice and was an excellent singer. Mrs. Bennett’s sister, Mrs. Sarah Porter, added that the pioneer was “of strong muscular frame,…lean of flesh with a thin visage, the bones of his face projecting prominently” and “that he was a great favorite among the children.” He and Elizabeth had six children—Robert, George, Theophilus, Jesse, Betsy, and Jane.

In a very short time, he had a house church known as a Methodist Class, the same name used for Wesley’s ecumenical house churches in Britain. This was the first class of Methodists in America and it met in the living room of the Strawbridge house. Later, it would meet in a log meeting house, and later still in the home of a neighbor, John Evans. A second Methodist Class was formed at Andrew Poulson’s home. Mr. Poulson was the brother-in-law of John Evans. When the crowds became too large for the Poulson house, Robert would preach under an old oak tree in the meadow.

Robert is credited with preaching and establishing Methodist Classes in many far-flung places. His journeys took him to Delaware and to the Eastern Shore of Maryland where he preached the first Methodist sermon to be heard there. He went beyond Maryland to Trenton, New Jersey, Georgetown, DC, and Leesburg, Virginia, where it is thought he founded the Leesburg Church on land deeded in May, 1766. And in 1774, in Huntingdon County, Pennsylvania, Philip Vickers Fithian, a Presbyterian missionary, noted the presence of a Methodist Society in Shirleysburg, in close proximity to land owned by Strawbridge.

At the first Annual Conference held in America in 1773, Francis Asbury, Strawbridge, and two others were appointed to Baltimore, the oldest and largest circuit of the fledgling church. From 1776-1781, in addition to serving his original Log Meeting House on Sam’s Creek, he also pastored at Bush Chapel, erected by Strawbridge in 1769, near Aberdeen, Maryland and probably the society at Shirleysburg, Pennsylvania.

During the course of his ministry, Robert also performed the first Methodist baptism anywhere, raised up many local preachers, and administered the Sacraments to many.

On a preaching mission, in 1781, he succumbed to an unspecified illness and died at about age 49 on the Wheeler farm near Hunt’s Chapel in Riderwood. An early convert of Robert’s, Richard Owings, preached the funeral sermon, and Robert was buried at the Wheelers’ (in 1866, his body and that of his wife, Elizabeth, were moved to the Bishops’ Lot at Mt. Olivet Cemetery in Baltimore).

Strawbridge’s ministry of little more than 20 years secured a firm base of Methodist Classes and preaching places for the foundation of Methodism in America. His influence was out of all proportion to his short life. Our unsung hero and patron saint died three years before the famed Christmas Conference at Lovely Lane Meeting House in Baltimore where the Methodist Episcopal Church was launched as a new Protestant denomination. At this Conference, Wesley’s envoys, Thomas Coke and Francis Asbury, were elected superintendents (bishops) and continued to carry on the work so faithfully begun by Strawbridge.