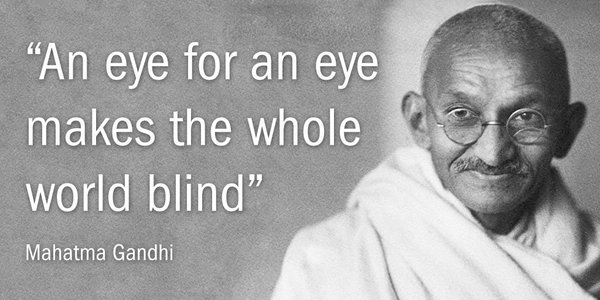 38 “You have heard that it was said, An eye for an eye and a tooth for a tooth. 39 But I say to you that you must not oppose those who want to hurt you. If people slap you on your right cheek, you must turn the left cheek to them as well. 40 When they wish to haul you to court and take your shirt, let them have your coat too. 41 When they force you to go one mile, go with them two. 42 Give to those who ask, and do not refuse those who wish to borrow from you.

For the past several weeks there has been a recurring theme – Jesus is saying “Follow Me!” We were working with the first several verses of the Chapter 5 of the Sermon on the Mount. This is the most important message that Jesus is giving his followers – it is how to live as a follower of Jesus. It was not until Acts 11 that the followers of Jesus were referred to as Followers of the Way or imitators of Christ – hence Christians. But the Sermon on the Mount sets out the standards of what it means to follow Jesus. When we look at these verses, they seem to be utterly impossible to follow. The new ethical standards from Jesus seem extremely hard to follow and we struggle with what they mean to us. Ethics are the moral standards that a person has developed as they mature into adult life. Society sets many of the moral standards and as we also know society pushes many immoral impulses.

This morning we are going to take a quick look at two of the sayings that Jesus has in the Sermon on the Mount that affect the way we live — do not murder and revenge.

What we find in the synoptic Gospels, which read more like stories in Matthew, Mark, Luke, is that to be a disciple is to learn from someone else and try to follow them. When Jesus calls people to be his disciples these are the words that he uses just before the Sermon on the Mount in Matthew 4:19, Jesus called out to them, “Come, follow me, and I will show you how to fish for people!” Later, in Matthew 16:24, we find these words: Then Jesus said to his disciples, “If any of you wants to be my follower, you must give up your own way, take up your cross, and follow me. In the Book of Acts, those who were part of the early church were called, “Followers of the Way.”

All the answers we give about what it means to be a Christian might be good answers, but they do not get at the specific understanding of being a disciple we find in the Gospels of Matthew, Mark, and Luke. Following is a direct command from Jesus to each of us, especially if we want to be the presence of Jesus the Christ in the world. Yes, make mistakes, but we should be asking, “How can I follow Jesus today? How can I do what Jesus wants me to do? How can I be the person that Jesus wants me to be?” If we can do these things, then we will find life and life that is abundant. We can then be instruments of giving that life away.

As we read the Sermon on the Mount, it is important to understand a few things about how Jesus speaks. First, Jesus often uses words that are called prophetic hyperbole. It is prophetic because Jesus lays out a bold vision for idea that is big and black-and-white. Hyperbole is speaking in exaggeration to make a point. If I say to you, “I am so hungry I could eat a horse.” Obviously, this is an exaggeration of my hunger – but it gets the person attention. Jesus will do this multiple times in the Sermon on the Mount, and we will see that in several of the texts before us today.

Let us look at the beginning of the first parts of Matthew 5:21-22 — 21 “You have heard that it was said to those who lived long ago, don’t commit murder.] and all who commit murder will be in danger of judgment. 22 But I say to you that everyone who is angry with their brother or sister will be in danger of judgment. The judgment for murder was the death penalty. Do you ever get angry? Can you see why this Scripture might seem impossible to live up to? Did you get angry this last week? Did you get angry this morning or before you came to church? Have you ever said that someone is an idiot (I use jerk!!) or posted something on Facebook or send an email calling people an idiot. Or is it a name for others in the opposite political party.

The truth is that each one of us have done this! Jesus takes one of the Ten Commandments that might seem irrelevant to most people because we are not in danger of murder and makes it applicable to everyone. We might think about murder in passing, but most of us are not close to doing that and taking someone’s life. We tend to then look at the Commandments like this and think we do not have to worry about them.

Jesus is pointing to our hearts and what is going on inside which can cause damage and hurt to others, to ourselves, and to God, since each of us are created in God’s image. Remember that when Cain killed his brother Abel, it began with anger, bitterness, and resentment in his heart. Jesus is inviting us to release our capacity to be angry and speak horribly about other people, whether to their faces or behind their backs or online.

When we look at the world around us, it is easy to see how we live in angry times. We have witnessed shooting at grocery stores and schools in the last few weeks, as well as other people around racial tensions in places like Minneapolis. Sometimes, anger is justified, and we read that God gets angry at times, so it is not just about being angry. It is about letting our anger get the best of us which leads us to destruction of other people and separation between ourselves and God.

Right now, we live in angry world and we see it manifest itself often, especially after this year of pandemic. In a recent study by AAA which found that 80% of drivers were angry at some point in the last week because of something which happened on the road in front of them are around them. When was the last time you let that jerk (oops!!) behind you finally get ahead of you? Especially when the road narrows because of construction. The jerk behind me gave me that international sign of love and goodwill through their windshield which I could see in my rearview mirror! We are all guilty of that, aren’t we? It is part of what it means to be human, and I think it’s why Jesus uses prophetic hyperbole to drive home this point about the sixth commandment, and that it’s not just about murder. Jesus is reminding us that nothing good comes from this kind of anger.

The second portion of today’s Scripture is about revenge. 38 “You have heard that it was said, An eye for an eye and a tooth for a tooth. 39 But I say to you that you must not oppose those who want to hurt you. If people slap you on your right cheek, you must turn the left cheek to them as well.

Anger can lead to revenge. When we have been wronged, we can often have anger welling up inside of us that leads us to do something that we would later regret. We say to ourselves, “I’m angry and someone is going to pay.” I am certain that we all have had instances in our lives when we want revenge. Revenge is when we want to hurt someone or least, we want them to hurt because of something they did to us. Revenge can lead us to hurt someone with our words as we resort to name-calling. The truth is that revenge can feel good for a while, especially if you feel like you are bringing some sort of justice. But revenge is never really justice, and it usually does not lead to a positive outcome as

Gandhi reminded us when he said, “An eye for an eye will leave the world blind.!” Revenge can be especially damaging when we are wanting that but there is no way to get it. This kind of desire for revenge builds up in us and we are fixated on it all the time. The next time that you feel like you need revenge you might ask yourself a simple question: if I get revenge in this way will lead to something positive? Do I really want revenge, or do I just want to be right? The truth is that revenge is often more about pride than anything else.

This Scripture on an eye for an eye is an exceedingly difficult part of the Sermon on the Mount to obey. Jesus commands us to practice radical love over revenge, and that is hard for us because when we are offended, most of us want revenge. Many movies are organized around the themes of justice and revenge. It is usually the hero who is hunting down the bad guys to take revenge on his enemies. There are two mistakes people make with these commands of Jesus. Some people try to explain them away, which takes away the punch of Jesus’ commands. While others find them impossible to obey, and so give up on them altogether. We need to be careful that we look at these commands within their immediate context and also in conjunction with other related commands of Scripture. Otherwise, we may put these commands so far out of reach that we never even attempt to obey them. It is radical love that is the solution instead of revenge.

Prayer: God, you know our hearts, our minds, and the many ways we fail and fall short of your glory and will. You created us in your image and yet we have damaged that image. We have given in to brokenness and pain and hurt so many times. You know how angry we get with each other over silly and serious things. God, you know the anger and animosity across our country right now. We have strayed from the path and we need to repent. Heal us. Heal me! Amen