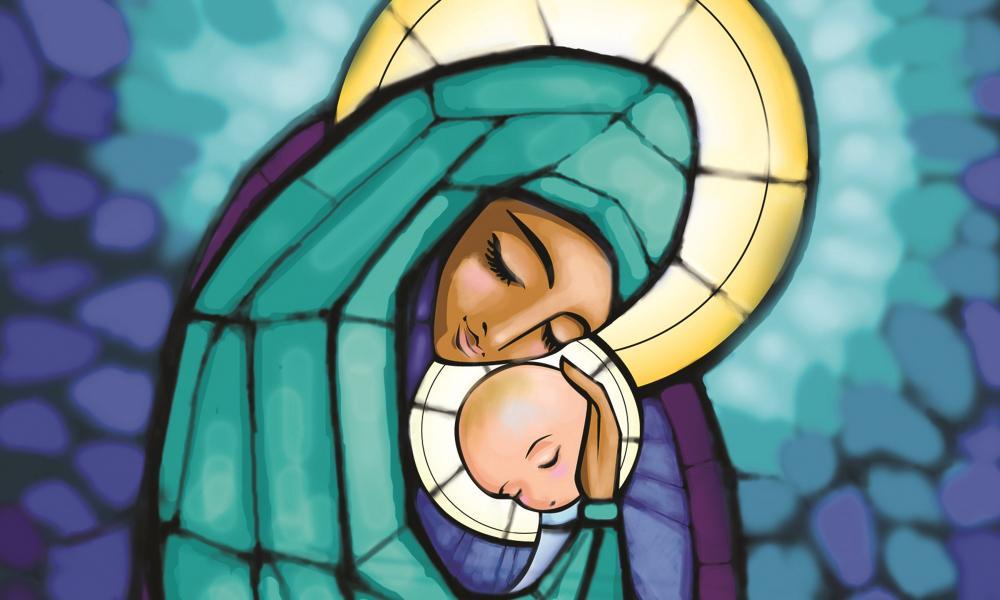 Luke 1:46-55  46 And Mary said: “My soul glorifies the Lord 47 and my spirit rejoices in God my Savior, 48 for he has been mindful of the humble state of his servant. From now on all generations will call me blessed, 49 for the Mighty One has done great things for me— holy is his name. 50 His mercy extends to those who fear him, from generation to generation. 51 He has performed mighty deeds with his arm; he has scattered those who are proud in their inmost thoughts. 52 He has brought down rulers from their thrones but has lifted up the humble. 53 He has filled the hungry with good things but has sent the rich away empty. 54 He has helped his servant Israel, remembering to be merciful 55 to Abraham and his descendants forever, just as he promised our ancestors.”

Today is the third week of Advent. We have just lit the third candle – called the candle of Joy. Christmas is only two weeks away from today. Christmas Carols are playing in the stores and on Alexa. It’s becoming that time of the Year.  Time is rolling very rapidly, and we realize it, don’t we?

As I looked at the Scriptures that were suggested for this week, Mary’s song was the Gospel lesson for today. My curiosity was triggered – maybe it would be good to see how this reading from the first chapter of Luke would enhance our sense of the coming of Christmas.

Seldom do we read Mary’s Song – especially if we are seeking joy and love as part of the Scripture readings. There’s not to much Joy and Love in this Scripture.

So, let’s dive into this an see if we can tie this reading into understanding that Mary is the Mother of Jesus.

Throughout most of the Old Testament – the Jewish Testament, there are longing cries for a new king to appear in the future. For centuries, the Jews had been overrun by enemy armies. Destruction of the sacred Temple in Jerusalem and countless human tragedies are a part of their history. There is little to hope for in the life of the average Jew as seen on the Old Testament. A new King is desired – one from the linage of David – the greatest King of the Jews which ushered in a time of peace and prosperity.

The only thing that would add hope and joy to the ancient Israel nation is to have a king that comes from the bloodline of David.

Prophecies kept predicting that it would happen – but nothing has happened, and the Jews are desperate for a response from God.

From Isaiah 7:14 “Therefore the Lord himself will give you a sign: The virgin will be with child and will give birth to a son, and you will call him Immanuel.” The name Immanuel means “God with us” and indicates the divinity of Jesus.

The prophecies are in place, but centuries have passed and nothing.

What we have are multiple 2nd and 3rd century manuscripts that support the slow emergence of this radical ideal, that Jesus is the long-awaited messiah.

Note to the Congregation: Turn to page of the Pew Bible and you can follow along with what comes next. Page 1591

What is more interesting is that only the Gospel of Mathew and the Gospel of Luke have any discussion of the birth of the Christ Child that we celebrate at Christmas. The Gospel of Mark has Jesus appearing with John the Baptist and The Gospel of John – has theological statements that Jesus is the Son of God – no birth stories.

And then in Luke 1:26, the Angel Gabriel appears to a young woman in Nazareth and the world is about to radically change — the Messiah is coming.

When we meet Mary, the mother of Jesus, she is a young Jewish woman, barely matured into marriageable years and newly engaged. At this time, the Jewish people lived in a state of spiritual silence and darkness, called the Dark Ages. Historically, it is the time between the Old Testament and New Testament where God’s communication through prophets came to a miserable halt.[1]

Hebrew instruction was given through the priests’ teachings at the Synagogue, much of which was distorted by the Hebrew teachers and lawmakers of the day – the Pharisees and Sadducees.

No one imagined a Nazarite woman from the lower class to be the mother of The Messiah.

So, why Mary? What made Mary special? Why was she chosen to carry and raise the Light that would shatter the darkness?

Although we learn of Mary through motherhood, her story stretches beyond motherhood to a life that men and women alike in all stages of life can relate to.

Mary was in no position for the circumstances she found herself in.

When Gabriel appears to Mary and tells her she is favored to bear the Messiah, a natural response would be to second guess, to be troubled by these words, and to seek what it means.

We can imagine that Mary would begin to think:

Why would God give the Savior to a woman knowing she would have to raise him in shame?

When we find ourselves unprepared for a daunting task or responsibility, a heavy flow of insecurities come, and possible present and future outcomes take hold of our imaginations. At this moment, Mary had two options – she could either choose fear or choose faith – but she could not choose both.

There are some of us today that can really relate to feeling like you don’t have all the answers, like you are unprepared for what life throws at you or even fearful of what may lie ahead.

The mother of the Savior of the world found herself in the same place, and yet God was with her. As Mary contemplated the angel’s presence, I imagine her face must have said it all. For upon looking at her, Gabriel responded, “Don’t be afraid.”

When we slow this story down to real-time, we see Gabriel reading Mary’s response to his presence.

And what Gabriel saw before him was a young woman who was fearful at his presence.

As they began to converse and Gabriel explained why he was there, Mary couldn’t escape the confusion of how? How was all of this possible?

Mary is not the first woman or person in Scripture to ask this question when God gives what appears to be an impossible calling. Others before her – Abraham, Moses, Gideon, some of the Prophets – all faced the same question: how? How could this be possible?

But Mary, at this moment, made her decision. If she lingered in the how she did not stay long. Our text tells us that with all the uncertainty before her, she chose to live by faith and accept what God was offering, over living in fear and rejecting what God was offering.

When two Westminster UMC pastors visited me in the Carroll Hospital Center in the late 1980s, they told me that they thought that I should go into the ordained ministry — become a UMC pastor. — In fear and a sense of an impossible statement. I laughed. I said, “no way!” A month later, with Ann’s encouragement I began to check it out. For my family – the rest is history – “Do not be afraid” when God asks the impossible of you!!!

Mary’s beautiful song of praise is commonly called the Magnificat, from the Latin for “magnify.”[2]

Mary magnifies the Lord, proclaiming God’s greatness and rejoicing in God as Savior. She begins with God’s actions in her own life, for in choosing her to be the mother of the Messiah, the Mighty One has indeed “done great things for” her. Elizabeth has just welcomed and honored her, saying, “blessed is she who believed.” Now she recognizes with awe that not only Elizabeth, but all generations will call her blessed.

The blessedness that Mary celebrates stands in stark contrast to our culture’s attitude. By our standards she does not look at all blessed.

She will bear the unspeakable grief of watching as her son is rejected, shamed, and crucified: “This child is destined for the falling and rising of many in Israel … and a sword will pierce your own soul too”

Furthermore, she perceives God’s action in her life as consistent with God’s saving action in history. The Mighty One’s agenda differs radically from the plans of human rulers.

Mary’s son will bless not the makers of war, but the peacemakers.

Mary’s song magnifies the Savior who loves the whole world with a love that makes creation whole.

The mother of the Messiah has experienced God’s blessing. She is not #blessed. Her blessing, like ours, is a cross-shaped blessing, “a condition of complete simplicity (costing not less than everything)” as T. S. Eliot so memorably said, yet bringing true freedom, the priceless gift of God’s salvation.

I am going to play a song that all of us have heard — “Mary Did You Know?”

I think one of the reasons this song is so beloved is because it addresses Mary in such a tender way and foreshadows all the amazing things that Jesus will do in his lifetime in such a way that many parents can relate to and often dream about as they wait for a child to be born or gaze into those newborn eyes or watch the child grow. We wonder who will this child become?

Listen carefully and follow the words on the insert of your bulletin.

Finally, as I wrap this message up: Mary’s response to life’s unpreparedness and uncertainties is a testimony for all of us here today. This past several years with the virus, the political junk, the social mess has been hard, but it doesn’t have to be hopeless. Maybe you have been caught off guard or knocked off your feet and left wondering, “How do I overcome this? How do I do things well?”

Or maybe God is calling you in ministry to do something that looks impossible. But on this side of the cross, that favor/grace is not given to just certain people at certain times. It is offered for all who believe, freely given to those who trust and obey. We live through this favor and experience it when we lean into what God is doing and hold onto Him for support and guidance.

We must pay attention to what God is doing in and around us.

We’ve got refuse to be stubborn or so fearful that we that we don’t answer and allow God to lead us.

Just like a mother and a father who takes on many roles as they serve their family and children, in order to handle them all with grace, the parents, like Mary and Joseph, must display a humble spirit that is open to God’s call on their lives.

Thanks be to God.