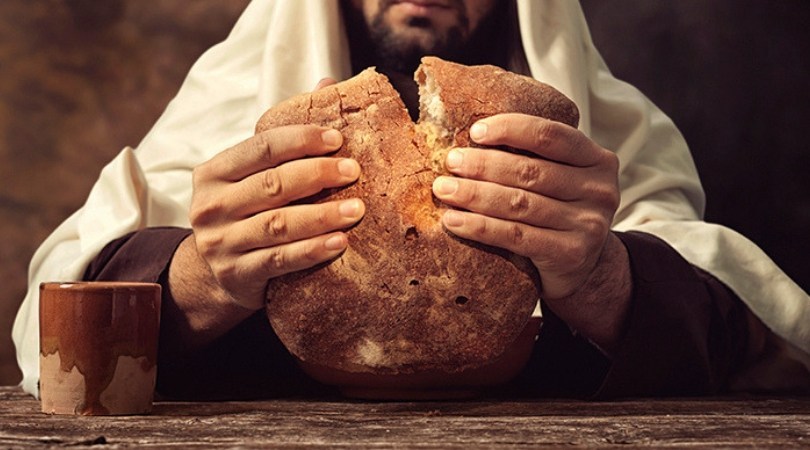 Luke 24:13-16    13 Now on that same day two of them were going to a village called Emmaus, about seven miles from Jerusalem, 14 and talking with each other about all these things that had happened. 15 While they were talking and discussing, Jesus himself came near and went with them, 16 but their eyes were kept from recognizing him.

Luke 24:28-31 28 As they came near the village to which they were going, he walked ahead as if he were going on. 29 But they urged him strongly, saying, “Stay with us, because it is almost evening, and the day is now nearly over.” So he went in to stay with them. 30 When he was at the table with them, he took bread, blessed and broke it, and gave it to them. 31 Then their eyes were opened, and they recognized him; and he vanished from their sight.

Luke 24:33-35 33 That same hour they got up and returned to Jerusalem; and they found the eleven and their companions gathered together. 34 They were saying, “The Lord has risen indeed, and he has appeared to Simon!” 35 Then they told what had happened on the road, and how he had been made known to them in the breaking of the bread.

One of the blessings of medicine is good eye care.  When our vision becomes compromised by age or disease, we are fortunate to be able to go to the ophthalmologist or optometrist and take care of the problem. Often the doctor prescribes eyeglasses or contact lenses, which correct our vision so we can see clearly. Good vision gives us the right perspective and enables us to function well. However, when we first try out a new prescription, we may find that it takes a while to get used to the corrected vision. At first things can seem a little strange, as though we are not seeing clearly. Gradually, our eyes adjust to the correction of the new lenses, and we are able to see well.

The Easter season is a time of adjusting to a new vision. God has done an incredible work. The tomb has been emptied. Death has been defeated. On the Sunday of the resurrection, our hearts are fill with joy and our voices soars with the hymns of new life. A new world has been born, a new vision has been given, and a new way of living has been prescribed. The church is invited to wear its Easter lenses as it looks out upon the world and responds to the challenge of living in light of the resurrection. Easter people live with the perspective of the resurrection. God has won the victory over death. The worst that can happen to us has been overcome by God taking Jesus from the tomb.

The early church had to get used to its Easter lenses. It must have seemed strange to live from the perspective of love in a world that was used to living in alienation.

It must have been disorienting to include the outcast and the marginalized in the fellowship of the church. But this is what the Easter community did, and its witness was powerful. The world stood in awe as it watched a community of love live its life with redemptive acts of service and inclusion. Such a community was a new reality that embraced a way of living that others had never imagined.

You never know when you’ll run into Jesus. It can be in church, at the moment of a baptism, when you behold the innocent, hope-filled face of a child of God. Or Jesus can appear during Communion, in the breaking of bread and the sharing of wine, when your eyes meet the eyes of the person who is offering you the bread of life or the cup of salvation, someone who maybe you’ve never really thought of as Jesus before. But suddenly, in that moment, when your eyes meet, you realize that in that connection, he has been made known to you. But of course, Jesus isn’t always seen in church, is he?

Jesus can appear in the form of a cashier at Walmart; the person who works hard all day, but still takes the time to be kind and personal with you and shows you generosity and compassion in the midst of a really bad day. Jesus can appear in the form of the woman who comes to clean your house, or the man who comes to search patiently for the source of the problem with your stove, and finds it, and fixes it, and then tightens the bolts and fixes the door of the oven and doesn’t charge you extra for his work. Why, Jesus can even be found in the seeming drudgery of church meetings!

We never know when we will run into the Spirit of Christ, or how long the encounter will last. We can no more control the Spirit than we can control the wind. The gifts of God’s spirit are free, spontaneous, and always, ALWAYS, surprising. But whenever Jesus appears, our own spirits are lifted. It is only afterwards, when we reflect on it, that we realized that the moment was like a fire burning inside of us, and that we have been in the presence of God. Then we may wish, like Cleopas and his friend, that the visit had lasted just a little bit longer—that Jesus would stay with us, because it is so good being with him.

Let’s continue with the Scripture lesson for today. Then Jesus begins to explain the scriptures — beginning with the prophets and interpreting everything about himself – but still they did not understand or recognize who the stranger was. Finally, as they neared the place where they were going to stay for the night — Jesus was going ahead — and they asked him to stay for a while.

When we are troubled and discouraged and struggling for answers– can we be like the men in the walk to Emmaus and ask Jesus to stay with us? – It is a plea –or a wish or a plea — Asking Jesus to stay —- These are words of faith — Jesus – stay with me for a while. Jesus stayed – but still they did not recognize him. It was only in the breaking of the bread – (as Scripture says — their eyes were opened) — did the men recognize that the stranger is the Risen Christ – the Messiah – Jesus Christ – he was alive and with them.

There are two key parts to the rest of this story about the walk to Emmaus that we need to address —First — at the breaking of the bread – they recognized that the stranger was Jesus — they remembered and talked about how their hearts were strangely warmed by the words that Jesus was speaking to them as they walked along — they heard the scriptures in a new light – the light of the resurrection and the Scriptures made sense — they began to understand that Jesus was who he said he was.

But this awareness came as the bread was being broken – just like we are going to do shortly – we will break the bread – like the body of Christ — and we will have the opportunity to see — maybe for the first time — that Jesus has been walking along side us all along and we did not know it. — In all of our struggles – in all of our pain — in all of our uncertainty — Jesus has been present with us.

And there is a second part —- with burning hearts – the men rose from the table and ran back to Jerusalem to tell the good news – Jesus is alive – we have seen him — he walked with us – he talked with us – he shared his life with us — and we have to tell everyone we see. Our hearts burning with the desire to tell everyone that it was Jesus who was with us during our times of trouble – during the suffering — during the struggle – during the pain – that Jesus was with us. – Now is the time to go and tell.

Concluding Prayer: Risen One, you showed yourself to the early followers to bolster their faith and to glorify God. Help us to recognize you not only in our breaking of the bread of the Eucharist but also in the breaking of the bread created by the actions of our everyday lives. Be close to us, Lord, as you were close to Cleapas and to Simon Peter and to all the unnamed disciples who saw you with their eyes. Lord Jesus be with all of us who must now see you with the eyes of faith. Reveal your resurrected image in a world being transformed through the power of your love. Amen