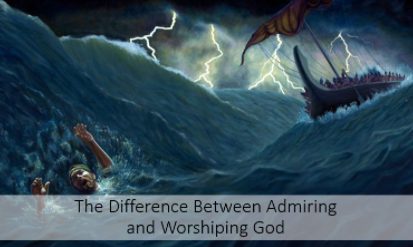 Jonah  1 The word of the Lord came to Jonah the son of Amittai: 2 “Go to the great city of Nineveh and preach against it, because its wickedness has come up before me.” 3 But Jonah ran away from the Lord and headed for Tarshish. He went down to Joppa, where he found a ship bound for that port. After paying the fare, he went aboard and sailed for Tarshish to flee from the Lord. 4 Then the Lord sent a great wind on the sea, and such a violent storm arose that the ship threatened to break up. 5 All the sailors were afraid, and each cried out to his own god. And they threw the cargo into the sea to lighten the ship.But Jonah had gone below deck, where he lay down and fell into a deep sleep. 6 The captain went to him and said, “How can you sleep? Get up and call on your god! Maybe he will take notice of us so that we will not perish.” 7 Then the sailors said to each other, “Come, let us cast lots to find out who is responsible for this calamity.” They cast lots and the lot fell on Jonah. 8 So they asked him, “Tell us, who is responsible for making all this trouble for us? What kind of work do you do? Where do you come from? What is your country? From what people are you?” 9 He answered, “I am a Hebrew and I worship the Lord, the God of heaven, who made the sea and the dry land.” 10 This terrified them, and they asked, “What have you done?” (They knew he was running away from the Lord, because he had already told them so.) 11 The sea was getting rougher and rougher. So they asked him, “What should we do to you to make the sea calm down for us?” 12 “Pick me up and throw me into the sea,” he replied, “and it will become calm. I know that it is my fault that this great storm has come upon you.”13 Instead, the men did their best to row back to land. But they could not, for the sea grew even wilder than before. 14 Then they cried out to the Lord, “Please, Lord, do not let us die for taking this man’s life. Do not hold us accountable for killing an innocent man, for you, Lord, have done as you pleased.” 15 Then they took Jonah and threw him overboard, and the raging sea grew calm. 16 At this the men greatly feared the Lord, and they offered a sacrifice to the Lord and made vows to him. 17 Now the Lord provided a huge fish to swallow Jonah, and Jonah was in the belly of the fish three days and three nights.

All of us have heard about Jonah. We know how God wanted to send Jonah to Nineveh, but Jonah ran away from God, got swallowed by a big fish, and then finally went to Nineveh anyway. He preached to the people of Nineveh, they repented, and God saved the city from destruction. That’s the story we’ve been told, and that’s the story that we think we know. But it is far deeper that that simplified summary. It’s a story of God’s loving grace to all people regardless of their worldly or economic status.

Before we dive into the book, let me provide some historical setting of Jonah. Jonah is a prophet in Israel in the 8th Century B.C. It was a good time for Israel. In fact, Jonah was a well-known and well-respected prophet. Second Kings 14:25 says that God “restored the territory of Israel to extend from modern day Syria down to the Dead Sea. Jonah had prophesied that Israel would expand her boundaries, and now it had happened! There was excitement in the air. Maybe now God was going to bless Israel and let it finally become the most prominent nation in the known world. On top of this, Israel was in the beginning stages of an economic boom that had not been known since the reign of King Solomon. Money was pouring in from all sides. People were getting rich. And after all, isn’t money a sign of God’s blessing? Well maybe it is – but in reality, wealth is not necessarily a measure of God’s blessings. Committing to follow God’s leading in our lives and follow-through is when God’s blessings come. There was only one real problem during this time period. Israel was a great nation, but over in the east, across the desert, another nation, Assyria, was beginning to grow strong. In fact, it could be argued that Assyria was just as strong and rich as Israel. In a sense, Assyria was Israel’s competition. They were rivals. If either one grew too much more, it would be war, and only one nation would survive. The capital city of Assyria was Nineveh (which still exists in modern day Iraq)

The Book of Jonah starts very quickly. Jonah hears the word of God telling him to go and preach the Word of God to the people of Nineveh because their wickedness had gotten God’s attention. Even though Jonah had been a prophet, he was being given a direct command from God. This is nothing new in the Bible. God always calls people to go into the messy lands and to risk everything – especially their physical comfort and relaxed lifestyle, and even their safety. God was calling Jonah out of his comfort zone. Tied into Jonah’s unwillingness to obey the Lord was due to his lack of compassion for his enemies and the fact that his patriotism was more important to him than his theology. The Assyrians were Israel’s political and geographical enemy and in his disobedience to God, Jonah revealed that his dedication was not to “God and country,” but rather to country and then God. Sound familiar today: passion for politics and patriotism at the forefront of our conversations! God takes second fiddle!

Everywhere in the Bible, God’s call creates a tension in the person’s life. Remember Moses! Moses was my age, and he was tending sheep. He was comfortable and God called him because God’s people were slaves in Egypt and God wanted Moses to go to the Pharaoh and tell the Pharaoh to free God’s people. Moses argued to God that he was not the right person for God’s mission — he didn’t have name recognition and power in front of Pharaoh. Moses did not have the skills to speak to the Pharoah. Above all, Moses says – please choose someone else. God’s response was crystal clear — I want you, no one else to set my people free. Jonah knew exactly what God was calling him to do – and he was afraid and scared and ran in the other direction. Why go to Nineveh, when Tarshish was so attractive? It was the party city in Jonah’s world – like the modern-day Las Vegas. So, our story begins.

So, the story continues, and we are only at the beginning of verse 4. Even though, Jonah, believed that he was outrunning God, he was sorely mistaken. God throws a severe story at the ship. A mighty tempest. The waves and winds are starting to sink the ship and whatever the crew does to lighten the load, does not work. They call out to their pagan gods, and nothing works. The sailors recognize that this significant storm is life threating.

When storms come into our lives, we have the promise, through Jesus Christ, that God will use our storms for good. A diagnosis of cancer can become life changing in our spiritual life with Christ. Moses had to become a fugitive and spend forty years in the wilderness before he could lead the Israelites out of Egypt. Jonah’s confession that he is running from God creates a dilemma for the sailors. What to do? Finally, Jonah tells them to throw him overboard and they do. And the storm quickly ends. A classical action! Remember how Jesus calmed the storm when the disciples thought that the end was near?

Nevertheless, as hard as it is to discern God’s loving and wise purposes behind many of our trials and difficulties, it would be even more hopeless to imagine that God has no control over them or that our sufferings are random and meaningless. Jonah could not see that deep within the terror of the storm God’s mercy was at work, drawing him back to change his heart. It is not surprising that Jonah missed this initially. He did not know how God would come into the world to save us. We, who live on this side of the cross know that God can save through weakness, suffering and apparent defeat. In the darkness of the crucifixion, God’s divine mercy was at work. As Jonah was sinking into the depths of the storm waters, God’s mercy was still working – and a large fish swallowed Jonah! God’s salvation for Jonah can show us how God continues to work in our lives through the suffering and defeat. God continues to work in our lives more and more as we go through difficulty and sorrow. There is mercy deep inside our storms. [1]

Jonah had a real problem with God’s direction in the first chapter. Jonah did not trust God. Maybe Jonah thought that nothing good could come out of his preaching God’s word to the Ninevites. He was second guessing God. All of us have had that experience. We sit in a doctor’s office and are stunned by the biopsy report. Maybe we despair in ever finding decent employment after the last job has dried up. Maybe a seemingly solid relationship with another person has evaporated because of a trust issue developed. Maybe we think: if there is a God, maybe God does not know what he is doing. So, we decide, does God know best or do we know best? – the Jonah problem. We doubt God! Adam and Eve had the same issues. You must not eat from the tree of the knowledge of good and evil, for when you eat of it, you will surely die. Adam and Eve – challenged God and so did Jonah.

As soon as Jonah hits the water, God’s mercy is evident to the reader. Jonah is saved.