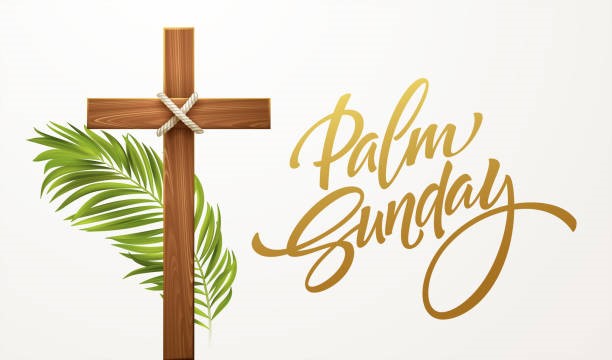 The morning Scripture: Matthew 6:9-139 After this manner therefore pray ye: Our Father which art in heaven, Hallowed be thy name.10 Thy kingdom come, Thy will be done in earth, as it is in heaven.11 Give us this day our daily bread.12 And forgive us our debts, as we forgive our debtors.13 And lead us not into temptation but deliver us from evil: For thine is the kingdom, and the power, and the glory, forever. Amen. King James Version

Prayer: Gracious God — this morning—as in every morning – we give thanks to you – for our families – our church families and for your Son, Jesus. Be with us again – visible – as we enter into Holy Week – Amen.

Isn’t it always a pleasure to be waving the palm branches.? We sing the traditional hymn — “Hosanna, Loud Hosanna” — the palms are carried in — we, like the crowds on the first Palm Sunday exclaim the hosannas — Hebrew for – “God save us now” —- an exciting time – a reflective time – a unique time — an event that we remember today that happened 2000 years ago.

Today is Palm and Passion Sunday —- it is a time of celebrating the triumphant entry of Jesus into Jerusalem — a time when the crowds lined the streets – joyfully anticipating a change — the king had arrived —- Finally — change was happening – the people felt salvation in the air — to the dismay of the Jewish leadership and the Roman occupiers. But the celebration did not last too long – no – like a lot of events in life the celebration was short lived — celebration turned into rejection and accusations – accusations turned into trials – trials turned into torture and then death.

And now we begin to enter into what the Christian church has called – “Holy Week” – a dark time in the life and ministry of Jesus – which would eventually end in the crucifixion of Jesus – before the glorious resurrection on Easter Sunday. For us to fully understand and appreciate Easter – we have to walk through the ever-darkening days of Holy Week – towards the darkest day of the Christian Year – Good Friday — good because it is the day that proclaims God’s purpose of loving and redeeming the world through the cross. – It is good – because now we look backward through the lens of Easter to the day of the crucifixion.

So – let’s start the journey into Holy Week – we begin with today – Palm Sunday. Each Palm Sunday and, in fact, each Sunday we say the Lord’s Prayer – a Prayer that Jesus taught his disciples. So many times, when I visit people in intensive care or in hospice – it is a tough time. Folks are scared – concerned and resigned.  Usually, I hold the person’s hand. I read some scriptures, and after some more limited interaction I pray with them, and I close with the Lord’s Prayer. Sometimes, I could hear the people trying to join in. As I ended, I looked up and saw tears streaming down their faces. That’s the power of the Lord’s Prayer. Something so well-known and meaningful that it can move an elderly person on the brink of death to tears.

What was Jesus trying to teach us? This week we come to the end of this series on the Lord’s Prayer as we look at its closing, “For thine is the kingdom, the power, and the glory forever. Amen.”  Since 1611, many earlier manuscripts have been found and they end with “Lead us not into temptation but deliver us from evil. Amen” and that’s where it ends. Because the original text does not have – the ending that we are so use to saying.

The interesting part of this is that the ending does not appear in most of your Bibles, at least not in the main body of the text. In Matthew 6:13 of our NIV pew Bible – page 1508, we see: “And lead us not into temptation but deliver us from the evil one” and that’s it. But if you look at the footnote it reads, “Some late manuscripts read ‘for yours is the kingdom and the power and the glory forever. Amen.’” It’s a footnote because the earliest manuscripts when the KJV was translated were not yet discovered.  Scholars call this ending the Doxology coming from the word doxo meaning glory. It’s a short word of praise, but it doesn’t begin to appear in manuscripts until the early 200’s. Most of the manuscripts, the writings of the early church Fathers and the commentaries on the Bible do not include that ending. It was only about 250 AD that it became commonplace.

A doxology at the end of a prayer was a common practice in the Jewish tradition and the early church. We see this throughout the prayers of the New Testament. Over time, the doxology was added to the Lord’s Prayer as a part of the text in the mid-2nd century. So, it was not original to the Lord’s Prayer.

These words may or may not have been on the lips of Jesus, perhaps not in the context of the Lord’s Prayer but it certainly was on the lips of King David. This is a doxology David prayed 1000 years before Jesus. Look on page 667 of your pew Bible. I Chronicles 29:10-12: See if you can hear our doxology: “Praise be to you, O LORD, God of our father Israel, from everlasting to everlasting. Yours, O LORD, is the greatness and the power and the glory and the majesty and the splendor, for everything in heaven and earth is yours. Yours, O LORD, is the kingdom; you are exalted as head overall.” Do you hear the doxology in that? “For yours is the kingdom and the power and the glory forever. Amen.” Today we’re going to look at why the doxology and what’s its meaning truly is.

The first thing I want us to notice is the word that connects the Lord’s Prayer with the doxology, “for.” Once again, the Greek word used for “for” has a number of different meanings but here it means “because.”

* ‘Daddy, hallowed by thy name,

* Thy kingdom come; thy will be done.’

* You can pray ‘Give us this day our daily bread.’

* You can pray ‘forgive us our trespasses, as we forgive those who trespass against us. And lead us not into temptation but deliver us from evil.

Several weeks ago, we talked about God’s kingdom and the part of the Lord’s Prayer in which we pray that God’s Kingdom will come, and God’s will be done on earth as it is in heaven. The definition of kingdom is: “a country, state, or territory ruled by a king or queen.” Today is Palm Sunday and on this day, we remember that when Jesus entered Jerusalem on the final week of his life, he comes to Jerusalem as a king. And Jesus has been teaching what a King is really like and what it means to live as a faithful subject of the King. Jesus said, “The time is fulfilled and the kingdom of God has come near; believe in the Good News.” Mark 1:15 In these words, Jesus is saying the kingdom of God is all around us and he’s inviting us to make the choice to follow God as King.

Power. God is power. When we think of the beginnings of the universe 14.5 billion years ago, scientists tell us that everything was condensed in something the size of the head of a pin. And then there was a massive explosion, and all of the energy and matter began to expand and continues to scatter into the farthest reaches of the universe. The Bible puts it this way: before there was anything, there was God. The Lord God created the heavens and the earth by simply speaking a word.

All the power, all the energy and all the matter that exist are a part of God. But there’s a 2nd aspect to this as well: when we pray, “thine is the power”, we are not only saying that God is all powerful but also in God’s presence we recognize that we are powerless.

This is a difficult admission for us because we like to fool the world and sometimes even ourselves into thinking we have the power, we’re in control and we can make it on our own. Isn’t that the ideal of America, the independent, rugged individual who can overcome anything and make of themselves and accomplish what they want? So, we pray “thine is the power” to not only remind ourselves that I am powerless without the Lord but to lay claim to that as well.

In AA there are three of the 12 steps that mention power. The first step tells us we don’t have power. The second step tells me where to find it, that is acknowledging a power greater than yourself, and the 11th step tells me how to access it through prayer and meditation. Perhaps the greatest stumbling block to faith is giving up our power and acknowledging God’s.

And the word became flesh and lived among us, and we have seen His glory, the glory as of a father’s only son, full of grace and truth.” John 1:14

“Thine.” In those words, we proclaim everything that exists belongs to you, O God, and everything that I am belongs to you. We struggle with this. From the very earliest moments of when we learn to speak. We learn momma and then dadda and then we learn to say “mine!” To the other kids on the nursery or to our brothers and sisters, we scream out mine. And the problem is even after we have become adults those actions and those thoughts stay with us: my house, my job, my car, my clothes, my money, my, my, my, my!

It’s hard to think and say thine. The problem is we are constantly fighting over what’s mine. And yet God is saying, you don’t understand. It’s not yours forever. It’s only on loan to you. You didn’t bring it with you, and you can’t take it with you and in the end, God says, it’s mine. A real change occurs within us when we move beyond just saying ‘Thine” and to actually believing and living as if everything really is Thine. When we do, we realize nothing is mine and it all belongs to God, and we fully surrender it to Him to use as He sees fit.

And then there’s one final word. It’s the same word in Greek and Hebrew, ‘Amen’ which means literally “so be it.” Or “Hear my Prayer”

What else can you say when you get to the end?  When we have said, God you are my God and I am your child, you are all around me all the time as close as the air I breathe, hallowed be your name. When we say God, let your kingdom come on this earth so there is no more hatred or racism or violence, no more starvation and no more pain. And may your will be done in my life in thought, word, and deed. When we say, God feed my soul so that I no longer hunger. When we live in His grace and say, O God forgive my sins and help me to forgive other people. When we ask God to lead us, to take control of our life so the path we walk might be in Him and deliver you from all kinds of evil.

When we say: For thine is the kingdom, and the power, and the glory, forever. What else can you say but so be it. Amen!!!

Thanks Be to God!