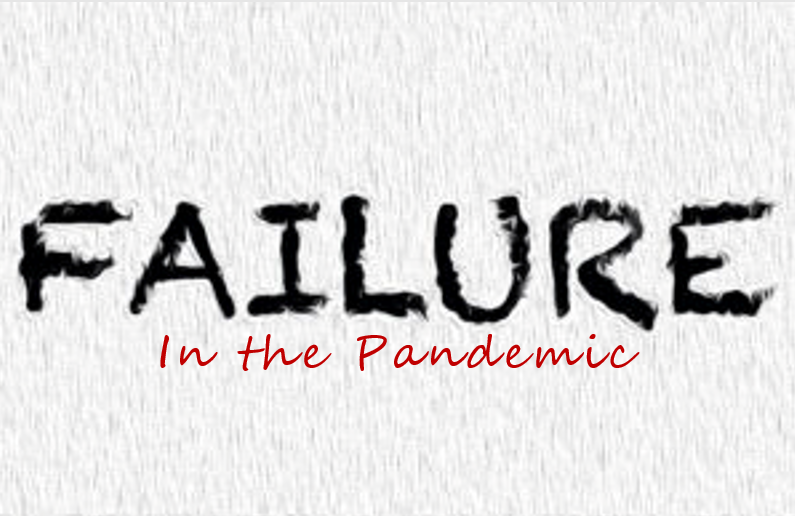 “Failure in the Pandemic”

Lord, be with us this day, helping us to put our priorities in order; so that we may faithfully serve you by serving your people. Heal our spirits. Enable us to follow your ways all the days of our lives.

After the death of Moses, the servant of the Lord, the Lord spoke to Joshua son of Nun, Moses’ assistant, saying, “… As I was with Moses, so I will be with you; I will not fail you or forsake you… Be strong and courageous; do not be frightened or dismayed, for the Lord your God is with you wherever you go.”   -Joshua 1:1, 5b, 9b

For the past several weeks we have been exploring how to have courage and hope during the Covid-19 pandemic. These are challenging times for all of us. We’re living in a world of uncertainty where many things can make us afraid – the slow and steady disintegration of the family, a volatile economy, and growing violence. In our current political environment, no doubt many of us are weary of the media coverage and personal debates, in addition to our own concerns about the impact to our nation and our world. Certainly this pandemic will not disappear soon – even if a vaccine appears tomorrow morning.

In this climate, taking responsibility and being informed is really important for us as Christians, but what’s even more important is the way we as everyday believers respond amidst these uncertain times. This could be the greatest and most strategic opportunity for the body of Christ to respond in decades.

Today I would like to address the fear of failure—especially during the pandemic and with this – how is our faith doing in-spite of masks, social distancing, and limited accessibility.

First a question to ponder: Think back on the times in your life when you have had failure – personal failure that helped to change the vision and hope that you had for your future life. How did you handle failure? Did you grow from your failures?

Here is an example: Billy Graham said that when he was asked to preach his first sermon. He had 4 sermons prepared and he was so nervous he preached all four of them in under 10 minutes. Can you imagine if Billy Graham had said, “You know, I’m just not cut out for this! I don’t want to endure that kind of embarrassment again” The world would have missed one of the greatest preachers of all time. Failure doesn’t have to be final.

In the early 1990s, Ann and I felt called by God to move to Christ House, a medical facility for homeless men in Washington DC. Ann and I know what risk is and what stepping out in faith is all about. Ann gave up a tenured position in the Carroll County Public School System. I gave up a demanding and rewarding job with Westinghouse. We had struggled for years as to how to follow the call that God had on our lives — and now we were stepping out into the unknown – God’s words to us were – “I will be with you”. More than twenty-five years later — I will be with you was and still is– God’s answer to Ann and me.

So many things that are good and important in life require risk—risking failure, humiliation, embarrassment, or pain.

Can you think of some good thing you missed out on due to fear of failure or scorn?

What was a time when you looked your fear in the eye, and toured one of life’s “beautiful mountain roads” because you moved through the fear?

Maybe the first step towards overcoming a fear of failure and taking risks is to recognize that you are going to fail at times. Sometimes you are going to make the wrong decision. Someone will laugh at you. People will say bad things about you. And yes, these failures will hurt…but not nearly as much as your fear.

Fear of failure can also be a powerful asset. It can lead us to work harder to develop the skills, so we do not fail. When I was 28, I was laid off from my second job as an electrical engineer. Our daughter was 2 months old and we had just purchased a house. It was a fearful time. Soon, though, I had a job with Westinghouse that lasted 28 years. I pledged to myself that I would never allow myself to get laid off again. And I did not.

But often the fear simply leads us to flee, to quit, to make excuses and seek to avoid whatever it is we’re afraid we’ll fail at. To analyze carefully whether the fear of failure is justified—usually it is not—by asking what the worst thing is that could possibly happen if one pursued the course of action. “You are going to fail at times. So is everyone you know.” Do you hear that message as a “downer,” or as a reassurance? Do you believe the flip side of that is that you are going to succeed at times? What makes it easy or hard for you to believe that?

Let us see what today’s Scripture says about failure and God’s promises to us.Often in Scripture God calls his people to take risks. In fact, you cannot be a Christian or a Jew without being willing to take risks.

Remember the story of Moses and God’s call on his life to confront the Pharaoh about freeing the Jewish people who were slaves in Egypt? It is a fascinating story about the fear of failure and the many excuses that Moses put up to avoid following God’s call on his life. It is in the first several chapters of Exodus.

At the age of 80 he was tending his father-in-law’s sheep and goats in the middle of the Sinai when God speaks to him from a burning bush and says, “I’ve seen the suffering of my people back in Egypt. Come, I will send you to Pharaoh to bring my people, the Israelites, out of Egypt.”  Moses tried four or five times to get out of heeding God’s call.

But Moses said, “O my Lord, please send someone else.” Imagine: God himself is speaking to Moses, and Moses tells God to find someone else. He is terrified of failing. Moses lists all his inadequacies as to why he could not do the job God wanted him to do. God’s primary response to Moses’ fear was captured in these words from Exodus 3:12: “God said, ‘I’ll be with you.’”

Moses’ greatest and most profound life experiences all come after this, the purpose for which his life had begun 80 years earlier. But he almost missed it for fear. Even though, with God’s help, Moses tried 10 plagues on the Pharaoh. All but the last one failed to soften the Pharaoh’s heart. Finally, the Israelites were able to escape slavery in Egypt and move towards the Promised Land.

Forty years later, as the Book of Joshua begins, Joshua and the Israelites are camped opposite the Promised Land, aware that there are fortified cities there and people who were well armed, much stronger than the Israelites. In their moment of fear we read these words: “After the death of Moses the servant of the Lord, the Lord spoke to Joshua son of Nun, Moses’ assistant, saying, ‘…As I was with Moses, so I will be with you; I will not fail you or forsake you…Be strong and courageous; do not be frightened or dismayed, for the Lord your God is with you wherever you go.’” Joshua 1:1-5

Jesus tells his disciples, a rag tag band of misfits—fishermen, tax collectors, most of whom had never been outside of the Holy Land: “Go and make disciples of all nations, baptizing them in the name of the Father and of the Son and of the Holy Spirit, teaching them to obey everything that I’ve commanded you. Look, I myself will be with you every day until the end of this present age.” Can’t you visualize their reactions: You want us to go where? Telling them what?

Over and over we find this word in Scripture: when God calls us God goes with us, and if God goes with us, we do not need to be afraid. But even if we do not need to be afraid, we will be afraid, which is where courage comes in. Courage pushes us through fear. But what is our courage grounded in? Is it grounded in our abilities and power? Or is it in God’s abilities and power? That requires that we trust in God. We call that faith.

So, I am going to ask you to step out of your comfort zone today and trust God. I want to give you this challenge today: “Will you take some God-honoring risks this week?”

Would you say “Yes,” to God? Some of you have been thinking about this for a long time. Take the risk. Will you ask God to replace the fear of failure in your life with faith in Him?