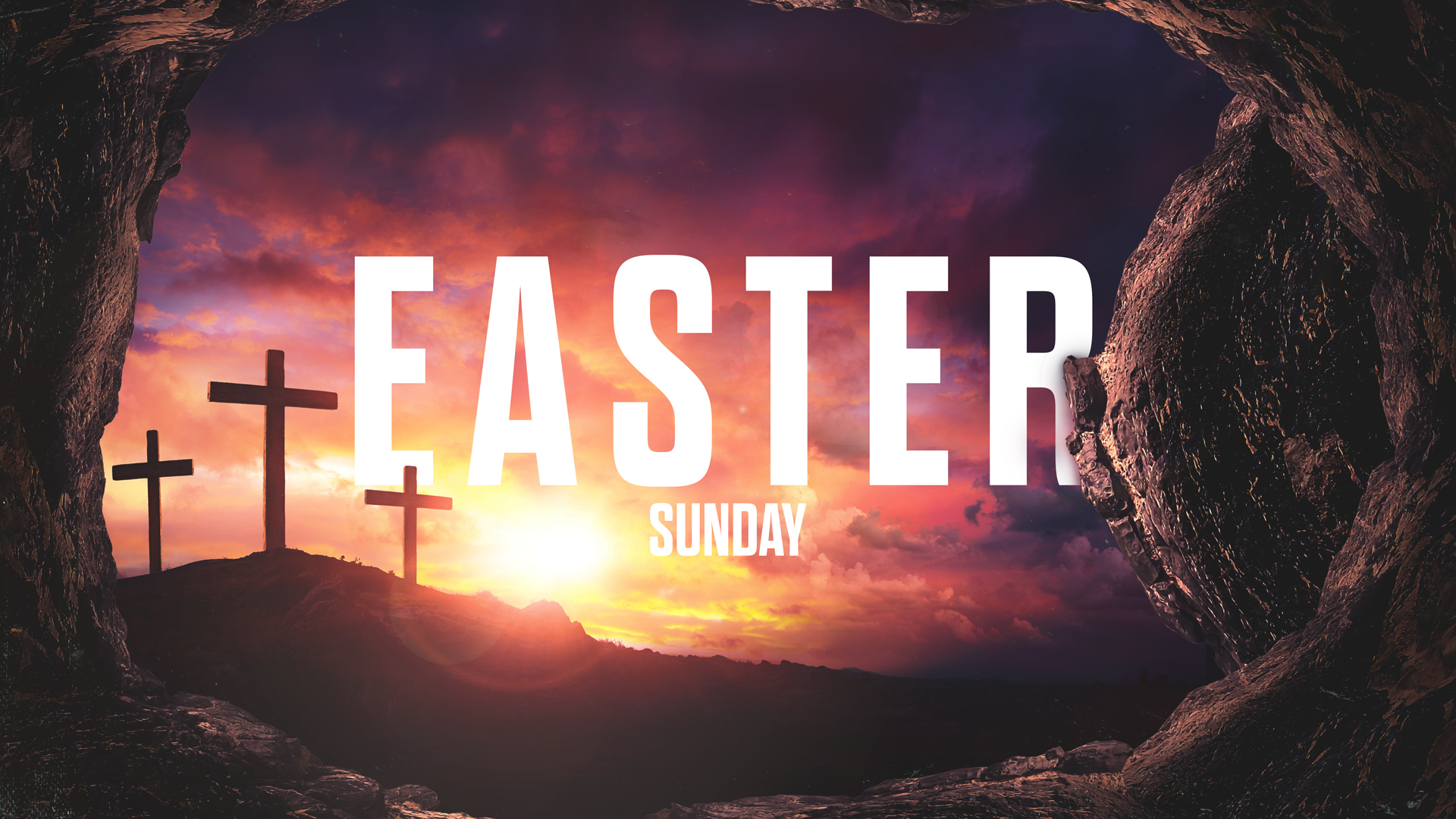 Welcome to the fourth week of the church shutdown because of the Coronavirus. To me it seems that it is impossible that we have missed four weeks of worship and, in reality, there is no end in sight as to when we will reopen.

Several days ago, Ann and I were reflecting as to “When was the last day we missed Easter?” We came to the conclusion that we have never missed Easter worship. When we were children, our parents always dressed us up in “Easter” clothes and went to church and then walked around the neighborhood with others in the “Easter Parade.” Even as teenagers we went to worship on Easter. Later as newly married parents, our family went to church in our Easter finest. Now, in 2020, churches are closed because of the virus — and we are making do with a variety way of worship. Easter seems somewhat distant, doesn’t it! But Easter is coming!!!

We need Easter now more than ever. We need its message of hope found in Christ’s triumph over the grave. Easter, Christ’s resurrection, was God’s way of saying, “darkness, disappointment and death do not get to have the final word!” I think of the words of the Gaither gospel hymn, “Because he lives, I can face tomorrow!”

I would like to recommend a live worship for Easter morning.

I recommend that you log into Adam Hamilton’s Easter worship service at 10:15 or Noon EDT on Easter morning — www.cor.org. Ann and I have watched this service for several weeks and find it very meaningful to us in this difficult time.

Christ the Lord Has Risen

Early on the first day of the week, while it was still dark, Mary Magdalene went to the tomb and saw that the stone had been removed from the entrance. 2 So she came running to Simon Peter and the other disciple, the one Jesus loved, and said, “They have taken the Lord out of the tomb, and we don’t know where they have put him!”

11 Now Mary stood outside the tomb crying. As she wept, she bent over to look into the tomb 12 and saw two angels in white, seated where Jesus’ body had been, one at the head and the other at the foot. 13 They asked her, “Woman, why are you crying?” “They have taken my Lord away,” she said, “and I don’t know where they have put him.” 14 At this, she turned around and saw Jesus standing there, but she did not realize that it was Jesus.15 He asked her, “Woman, why are you crying? Who is it you are looking for?” Thinking he was the gardener, she said, “Sir, if you have carried him away, tell me where you have put him, and I will get him.” 16 Jesus said to her, “Mary.” She turned toward him and cried out in Aramaic, “Rabboni!” (which means “Teacher”).17 Jesus said, “Do not hold on to me, for I have not yet ascended to the Father. Go instead to my brothers and tell them, ‘I am ascending to my Father and your Father, to my God and your God.’” 18 Mary Magdalene went to the disciples with the news: “I have seen the Lord!” And she told them that he had said these things to her.

As I prepare this message to you – it’s Good Friday. Ann and I had the pleasure today to visit about ten of you as we delivered the Easter flowers that cannot grace our sanctuary on Easter Sunday because we are closed. It was a joyful time to see some of you who have been house bound for a long time.

Good Friday is the day that we remember the story about how Jesus’ love and compassion for us all was so threatening to some that they would kill him. The Good Friday story is about how God became human like you and me and told us how to live and how to treat one another, but the world wouldn’t hear it. Good Friday is how the world sometimes does its worst to those who do not deserve it.

Two thousand years after the death of Jesus, we have the luxury of being what some call “Easter people”. We know how the story plays out, and we know that Jesus does not stay in the tomb. As much as the story affects us when we hear it again, we have that consolation. Good Friday is not the end.

Now, what if you read the above Scripture from John 20 for the first time? What if you had lost your friend who was the embodiment of love, and on Friday evening you had no hope — only a gut-wrenching sorrow? That’s what Jesus’ friends were going through. Jesus was their teacher, and they were his disciples, but they were also his friends. And they had loved him. They loved him so much, that as soon as they could they went back to his grave. Maybe just to be close to him. They were good Jews, so they would never have gone to a grave on the Sabbath, but as soon as they could they went.

Mary Magdalene went first. She got there and the stone that had sealed the tomb was gone. And she looked in and so was the body of Jesus. And she runs to Simon Peter and John and tells them, and they race each other to the tomb and look inside. Nothing. Just a few cloths that had wrapped the body. Simon Peter and John then leave Mary Magdalene there. She stays, weeping, until she hears a voice: “Why are you crying?” She thinks it’s the gardener. She says, “If you took him away, if you have him, just tell me. I’ll take him myself.” And then the voice says her name, Mary, and she knows. She cries out, “Rabbi”. And she knows it is him. And Jesus picks her, the one who stayed, and wept, and searched, and sends her to tell the other disciples what she has seen—”I have seen the Lord!”

Mary is the first witness to the risen Christ, the first to testify to what she has seen. The first to get to share the good news. It’s an awesome task to be given. To see the risen Christ, and to be told by Him to spread the word – “Don’t keep it to yourself. Go…tell the ones who need to hear it the most, the ones mourning and in pain, that I am risen. Go and tell them, suffering and pain and hate and death did not win.”

Mary got to do it first. She went and said, “I have seen the Lord.” She was the first one Christ asked to do it. But that doesn’t mean she was the last to get the job. Because every person who would follow the risen Christ gets the same assignment. Everyone who would call themselves a Christian gets asked to do the same thing as Mary: go to the ones who need to hear it the most and tell them you have seen the risen Christ. It was an important job two thousand years ago, when the disciples mourned for the one, they thought they had lost. But it’s still an important one today.

As much as we are Easter people, much of the time we still live in a Good Friday world. We’re still a world that chooses violence, and fear, and hate, too much of the time. Though Christ is risen, we often choose to act in the exact opposite way than what he taught us. That means that on most mornings, a fair number of people are feeling the same way the disciples must have been that morning. They’re wondering where hope has gone. They’re crying out for another way. They’re listening for any news that suffering doesn’t win. That death doesn’t get the last word. That God is so good, and so full of grace, that God doesn’t give up on the world, and the stone rolls away from the tomb.

In the midst of the flood of daily news and reports about the increasing virus caused deaths and people who have contracted the virus, we hear stories of amazing strength and purpose and commitment. We hear of people being healed and coming out of the hospital. We hear and witness new stories of kindness and compassion radiating from the sense that hope still abides in the human soul.  We hear of Resurrection stories.

We’ve celebrated Easter at Pleasant Grove UMC every week for more than 150 years. And we’ve celebrated it in our hearts even more. Don’t let anyone tell you that we have not experienced resurrections. They were, because God was there giving new life in each one of them. And I look at each one and say, “I have seen the Lord.” May it be so this year, in Easter, and every day.