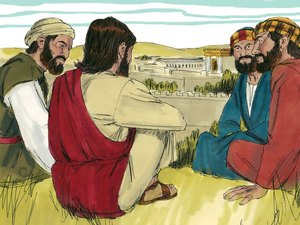 As Jesus was leaving the temple, one of his disciples said to him, “Look, Teacher! What massive stones! What magnificent buildings!”

2 “Do you see all these great buildings?” replied Jesus. “Not one stone here will be left on another; every one will be thrown down.”

3 As Jesus was sitting on the Mount of Olives opposite the temple, Peter, James, John and Andrew asked him privately, 4 “Tell us, when will these things happen? And what will be the sign that they are all about to be fulfilled?”

5 Jesus said to them: “Watch out that no one deceives you. 6 Many will come in my name, claiming, ‘I am he,’ and will deceive many. 7 When you hear of wars and rumors of wars, do not be alarmed. Such things must happen, but the end is still to come. 8 Nation will rise against nation, and kingdom against kingdom. There will be earthquakes in various places, and famines. These are the beginning of birth pains.